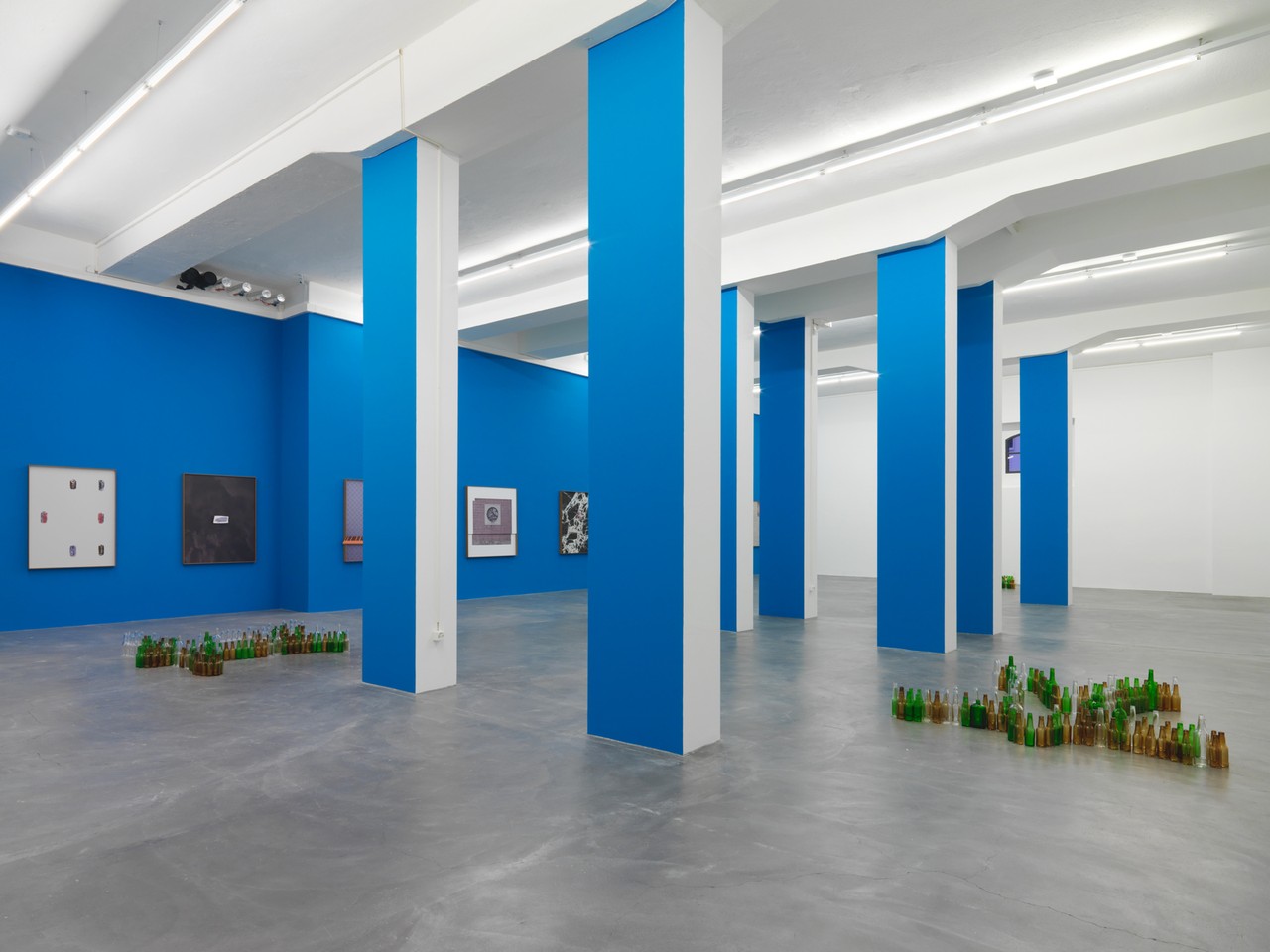 With his sculptures and collages, Valentin Carron imitates traditional handicrafts, lesser known art-works (some of which were meant for the public space), stereotypical forms of modern art, and certain forms of the everyday. By appropriating these objects, he questions originality, authenticity, and identity in the globalized world. His reformulations of traditional handicraft, mainly from his Swiss home, show a characteristic touch of irony: Carron recreates these incarnations of a romantic, pastoral Switzerland with cheap industrial materials like polystyrene. At the same time, he often works with the help of specialized companies located in the same region as the traditional crafts industry they imitate. Considering that some of the "traditional" designs, associated with an authentic image of Switzerland, were established in the 19th century to serve the emerging mass tourism, Carron also reveals how identity is created as a national strategy. Doing so, he raises the question what is more authentic: Original handicraft, or his own contemporary imitations.

The title “Insieme” italian for “together”, alludes to recent political discourses and at the same time ironically embeds his works in collective practices. In the exhibtion Carron shows his new "Bottle Man" sculptures along with a series of collaged low reliefs. The wall on which the low reliefs are presented is painted with a blue color named "himmelblau" (sky blue), a word which, in German, refers to both sky and heaven. This common product poetry is led to absurdity by Carron's playful overachievement of painting one – but only one – side of each of the columns in the room in "himmelblau" as well.

The "Bottle Man" sculptures feature the same kind of absurdity as the color-branding: Carron took their forms from websites presenting pictures of drunken bodies, decorated with empty bottles and then photographed by their drinking buddies. "Bottle Man" pushes Carrons approach to sculpture one step further: Instead of adressing himself to the real public space, he pulls 2D motifs from the internet – the virtual public space – into the real world. Every single bottle from the "Bottle Man" silhouettes is crafted by a master glassmaker, copying Heineken, Corona, Super-Bock, a few bottles of wine, Jägermeister, and vodka – as if the internet with its claim to spread authentic pictures had fallen directly into the gallery.

The collages, built into MDF "boxes", are actually low reliefs. The plain binary forms of a backround and a subject mirror the silhouettes of the "Bottle Mans", and thus create a playful way to deal with what we consider 2D and what 3D: The "Bottle Man" sculptures evoke the 2D image of a silhouette, while the low reliefs seem to be 2D at first glance.

Carron employs a variety of symbols, taken from both the High and the Low: Motifs like a red silhouette on a cloudy background (taken from a hairdressing salon), contemporary Roman graffitis (Ciao, Ciao ...), Lucio Fontana's Teatrinos, crushed and scanned cans of second class energy drinks, a silhouette of the minotaur, or pompous marble tromp l’œils.

The most famous quote by Valentin Carron might be that the irony of his work lies in spending a lifetime on objects he abhors. In case of the "Bottle Man" sculptures, it is time spent surfing on websites which try to be funny – a contemplative act of escape or even capitulation. "Bottle Man" elevates the drunken image of human disaster to a crafted art piece presented in a plain exhibition space. The reference might be funny, the work itself doesn’t make us laugh. It expresses the turning point where the comic turns into tragic, as if Carron had deadened a picture – which already indicated a corpse – again by turning it into a piece of art. In "Bottle Man", Carron presents a sharp analysis of everyday culture while encapusalting the tension-filled poetic of his own work.