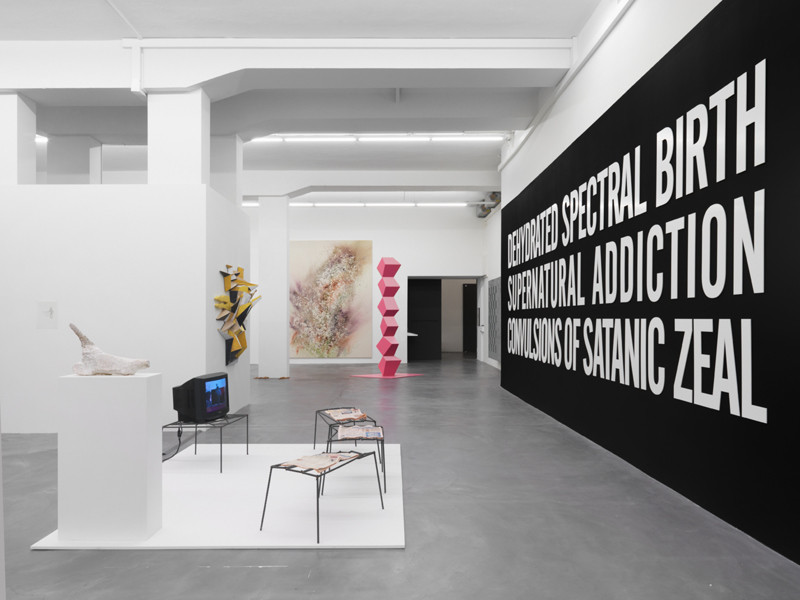 At the same time as Art Basel, the Galerie Eva Presenhuber is pleased to present in its Löwenbräu location the exhibition WORKS BY . . . , with sculptures and installations by a number of the gallery’s artists.

Martin Boyce (born 1967) is showing three works that together form a reconstruction of a room from his one-man exhibition No Reflections at the Venice Biennale in 2009. Here, with his adaptations of everyday objects Boyce turned the ephemeral splendor of a Venetian palazzo into an atmospheric, poetic landscape. Boyce is known for his sculptural installations reminiscent of traditional public spaces—a playground, a pedestrian underpass, an abandoned swimming pool, or, as here, part of an elegant residential interior. A table with a chandelier above it, a silkscreen print on the wall, and folded-paper autumn leaves on the floor create an immersive environment based on the iconography of modernistic design. In the exhibition the three works are not presented in a separate room, but in an open space in dialogue with the works of other artists.

The American artist Joe Bradley (born 1975) presents a group of 12 charcoal drawings on paper. Starting from archetypal forms, Bradley constructs different groups of works. The works exhibited are similar to children’s drawings, and in their reduced pictorial language follow the modernists in the direction of primitive art, yet with an ironic side glance at cartoons, which play a key role in Bradley’s œuvre.

The work of Angela Bulloch (born 1966) is characterized by an interest in the ways systems of rules and organizational principles determine our behavior and structure our environment. In the exhibited work, Heavy Metal Stack of Six (Pink), the artist employs the form of the polyhedron. There is a long tradition of interest in this geometric shape: to Plato polyhedrons represented ideal universal building blocks. Johannes Kepler, the 17th-century mathematician, saw in them proof of the divine within the “world harmony.” Their combination of simplicity and complexity has always fascinated architects and artists as well. In her work Bulloch makes use of computer software so as to deform the polyhedron. These modified rhombuses serve as the starting point for the sculpture. Here the larger-than-lifesize, totem-like object composed of various deformed rhombuses seems to almost stubbornly wish to assume personalities.

Sculptural works are central to the work of Valentin Carron (born 1977). His works are inspired by his nearby surroundings and Valais homeland, where he grew up and lives and works to this day. His pictorial language plays with the iconic symbols of this well-known tourist mecca, ironically altering them and making them his own. With its stylistic contrasts and use of “fake” materials, Carron’s work is provocative, questioning the difference between original and copy and elucidating tradition and identity. The works Fibre fibre, austère austère (2009) and imperia V (2012) are artistic adaptations of architectural elements. On the one hand they go back to opened wall elements like those found in peasant architecture, and on the other to decorative elements as found in wall reliefs.

The works of the American artist Trisha Donnelly (born 1974) have always been invested in a comprehensive inscrutability. They have almost never been adequately described or made a part of current artistic discourse. Ranging as it does from video works, classical drawings, textual works, audio installations, and photographs to impressive performances, its very variety is an obstacle to possible interpretation. In her sculpture, Donnelly has for some time worked in marble, the most highly charged material in art history. Her Scones are marble shapes borrowed from Art Deco architecture, which with their provocative forms and their placement like that of a facade relief give an air of the theatrical, historical, and glamorous to the space.

For a long time now Sam Falls (born 1984) has concentrated on the influences on his predominantly abstract pictures and sculptures of natural phenomena like rain, wind, or direct sunlight. The notion of gradual decomposition or progressive natural change leads to works that are not presented to the viewer in a final, perfected state but that rather emphasize and represents the aspect of process.

In its coloring, the work of Alex Hubbard (born 1975) varies from an amber-colored, beer-bottle brown to a purplish-black that resembles melted plastic. Against the white of the gallery wall, his painting seems like a projection, an usher between spaces or a porthole to the outside.It has long been Hubbard’s practice to mix up an artist’s various roles: a painter who makes films, and paintings that are sculptures. With his “Urethane Paintings” he also skillfully manages to visualize his notion of space and architecture and to captivate the viewer with a labyrinth of colors, textures, and filtered light that fills the entire space. When the stretchers are installed in front of windows, they seem like duplications of the motif, for they take on the structure of the window frames.

The photographs of the Norwegian artist Torbjørn Rødland (born 1970) can be thought of as ongoing investigations and provocations. Since the mid 1990s Rødland, who refers to himself as a “picture maker,” has been creating an unsual photographic œuvre that shifts the boundaries of aesthetic expectations and social norms. His approach extends from highly stylized, realistic representations of people, landscapes, still lifes, and profane subjects. But in Rødland’s work seemingly ordinary objects not infrequently transform themselves into eerie situations.

The work of Ugo Rondinone (born 1964) is extremely complex, encompassing photography, video, installation, painting, sculpture, and drawing. All these mediums allow him to constantly reformulate and reenvision an idiosyncratic, poetic, ruminative world. Often called a romantic, the artist deals with issues of time, finality, reality, and the dream. Rondinone’s exhibited door is not a copy or adaptation of a concrete original, but a free interpretation borrowing from the world of comics or mythology. A poetic symbol as the passage into another world—another state.

Steven Shearer (born 1968) works in various mediums, from found photography, drawing, and painting to collage, primarily presenting a melancholy vision of youth characterized by strong references to the iconography of the Heavy Metal music scene. Shearer’s world features alienation from and aversion to the everyday; it is one whose heroes are Death-Metal rockers, cast boy groups, and teenie stars from the 1970s as well as leisure-time glam rockers and guitar-swinging suburban youngsters with great dreams in their cramped cellars. Shearer is less interested in his figures’ fame than in their breakup.The exhibit presents one of the artist’s poems, the vocabulary of which is drawn from Black- and Death-Metal music. As applied to the wall, the text attests to the sublime, nihilistic power of language, and attempts to provoke a visceral reaction on the part of the viewer.

Oscar Tuazon (born 1974) draws inspiration for his work, mostly consisting of constructions in wood, concrete, and steel, from the structures of the do-it-yourself and survival movements, not so much in terms of form but rather as strategies. In his works concepts from Land Art are blended with those of Minimal Art into a combination of abstraction and pragmatic construction. The physical and collective challenge in the works’ production, together with references to the exhibition venue, are key features in Tuazon’s work, which is characterized by the dissolution and recombination of traditional genre divisions in architecture, sculpture, and design.

Already at an early stage Franz West (1947–2012) turned away from painting and chose collage as a fundamental technique for his further artistic creation. In doing so the artist placed himself in the tradition of Viennese Actionism, especially the material and body actions of Hermann Nitsch, Otto Mühl, and Günther Brus. Though he does not directly adopt their content, with his focus on the body in his art and his interest in fathoming psychic experience Franz West belongs to a uniquely Austrian tradition. His exploration of the body led beyond collages to early sculptural works, first in papier mâché, then polyester, and since the end of the 1980s cast aluminum.
www.presenhuber.com