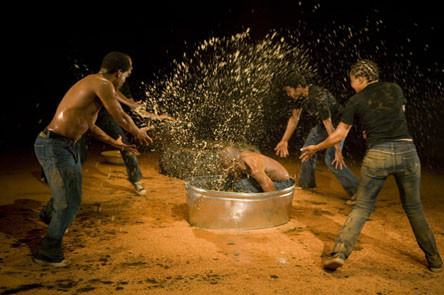 “...Bloss' of snow may you bloom and grow
Bloom and grow forever
Edelweiss, Edelweiss
Bless my homeland forever”
(from the American Musical (1959) and Film (1965) “The Sound of Music”)

“The Sound of Music” is one of the ten most successful films of all times, reaching approximately 1.2 billion viewers all over the world, receiving 5 Oscars and 2 Golden Globe Awards. Today, more than forty years later, its success continues. The film has strongly influenced the general image of Austria worldwide, portraying it as a beautiful country serving as a backdrop for a naïve, creative people happily indifferent towards, if not actively supporting the “Anschluss”. In Austria itself the film did not only flop miserably at the time of its release, it remains mostly unknown to this day.

The contrast between the film’s huge international degree of popularity and its non-acknowledgement in Austria can only be understood as a bizarre manifestation of the Austrians’ unwillingness to deal with a version of the past that has not been adjusted to suit their own self-image. The casually honest portrayal of the country’s National-Socialist past was and still is simply an affront to a people that is doing its utmost to forget.

To what degree is our identity shaped by our awareness about our history?
In order to fully embrace the future do we have to understand the past and how it has shaped us?
Is there, on the other hand, any legitimacy in the saying “to forgive and forget”?

It is a natural human process to blank out unpleasant facts from one’s own memory. At the same time contemporary art practise clearly illustrates our need to find out where we really come from. The exhibition addresses these questions in an international context, whilst stressing the relevance of the project being shown in Austria – a country renown for its problematic position in relation to its own past.

History and its narration, memory and the process of remembrance and their impact on the understanding of (national) identity are common themes in the diverse and international projects included in this group exhibition. Artists from twelve countries show projects that use a variety of media, including photography, film, theatre, installation and performance art, and even pop-up books as tools in the exploration of the past and its effect on us.

Susan Silas (USA), Lamia Joreige (Lebanon) and Yael Farber (South Africa) are among the internationally renown artists that will show their work in Austria for the first time within this exhibition.
kunsthalle.wuk.at