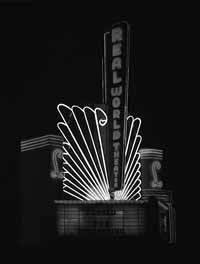 Re: Re: Re: Re: Re: Re: Re: collects diverse artistic positions which in different ways deal with re-enactments in their work and process. A central point is the play with realities, expectations and experiences. The artists’ objects, installations, films and performances consist partly of conscious reconstructions: initially invisible, they disclose themselves and thereby deconstruct the addressed themes. In this way, the breaks but also the fulfillment of expectations and the challenging of imagination are in a close connection with the re-enactment applied by the artists. This can take the form of a reconstruction, a translation as well as repetition or reproduction of an action.

The play with decodable illusions, for example, to deconstruct or question through reconstruction constructions which have become real, could also be described as the use of ‘stagecraft’ techniques. The observers are presented with a fictiticious reality which forces imagination and causes a subtle derangement of their everyday understanding of space and time.