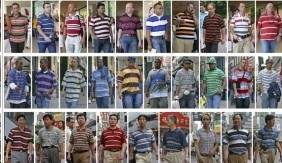 Foam_Fotografiemuseum Amsterdam presents ‘Paris - New York - Shanghai’ by Dutch artist Hans Eijkelboom. This exhibition features a selection of ‘photo notes’ taken by Eijkelboom in these three leading cities. He chose these metropolises because each has at one time been the focus of innovation and change: Paris in the 19th century, New York in the 20th century and Shanghai now, in the 21st century. For this exhibition Eijkelboom has compiled series and created forms showing street scenes in the various cities which, despite their enormous historical and cultural differences, look increasingly alike.

While making ‘Paris - New York - Shanghai’ Eijkelboom wandered through these cities observing life on the streets. Whenever he noticed a recurring theme or dominant subject he began photographing. “After standing on the corner of Broadway and 34th Street for around fifteen minutes on Tuesday, 21 March 2006, I noticed that many people were wearing camouflage-coloured clothes. When I realised that I photographed every passer-by wearing camouflage clothes between 13.30 and 14.45,” explains Hans Eijkelboom.

Eijkelboom compiled around thirty sets of photos like this, presented here in clearly defined groups on particular themes: women carrying Louis Vuitton bags, taxi drivers, mothers with children, men in striped polo shirts. The series produced in the three different cities are displayed here together. Each portrays a unique individual; collectively they demonstrate the uniformity of the mass in the urban landscape. These apparently superficial similarities seem to bridge the differences in culture and history in today’s world.

‘Paris - New York - Shanghai’ is part of a large project, ‘Photo Notes’, which Eijkelboom began on 8 November 1992 and which is set to finish on 8 November 2007. For fifteen years he has taken between one and eighty photos at least five times a week. The result is a photographic diary in which Eijkelboom describes the world in which he lives, which influences and forms him. This project deals with themes that have interested Eijkelboom since 1973: the relation between individuals and other people, the creation and nature of a person’s identity and the relation between identity and a person’s world view.

Hans Eijkelboom (b. 1949) has featured in solo shows at Kröller Müller Museum in Otterlo and the Dutch Photo Museum in Rotterdam. He has also participated in various group exhibitions, both Dutch and international. October sees the release of his book, ‘Paris – New York – Shanghai’, published by Aperture. After Amsterdam, this exhibition travels to New York and will appear later in London and Paris.
www.foam.nl