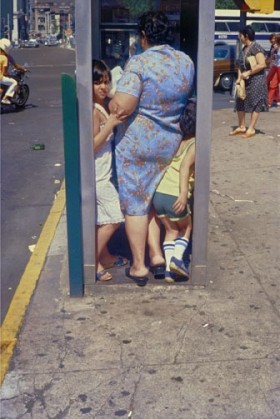 This autumn, Foam_Fotografiemuseum Amsterdam presents a retrospective of work by the famous American street photographer Helen Levitt (b. 1913, New York). Inspired by her mentors and friends Walker Evans and Henri Cartier-Bresson, Levitt recorded life on the streets of 1940s New York in black-and-white photos. Her work set the tone for a new documentary style in American photography. Her photos are visual poems in which form, colour and movement all play a key part. Among the exhibits in In the Street is a series of contact sheets which show how Levitt moved about when photographing on the streets, recording the choreography of the people around her. Helen Levitt was also a pioneer of colour photography. In addition to her black-and-white photos, the exhibition also features a selection of her famous dye-transfers (colour photos).
Helen Levitt grew up in Brooklyn, New York. Having left school early, she spent four years working as a commercial photographer, teaching herself the skills. Social unrest in the 1930s led the government to help set up projects to deal with problems caused by the Depression. One of these was the Farm Security Administration, which included a highly influential photography programme. But after she saw the work of Henri Cartier-Bresson, Levitt was less interested in rural America, and determined instead to record life in New York. Not as a documentary but as observation. Inspired by Cartier-Bresson, in 1936 she bought a Leica and took to the city streets, beginning by photographing children. She concentrated mainly on the poorer neighbourhoods in New York, since street life was more visually interesting here. Her pictures show scenes from everyday life: children playing, adults talking, passers-by. Despite their everyday subject matter, the photos are full of drama, humour and grace.
In 1959 and 1960 Levitt received two grants from the Guggenheim Foundation to record the city’s streets, this time in colour. In these photos, colour becomes an eloquent, expressive aspect of her subject. This powerful visual element draws the viewer to other parts of the picture. Moreover, the photos from this later period show different neighbourhoods, where Levitt searched for a new impulse. Her focus in these works is on older people, rather than children. The compositions are more tranquil, which partly reflects her own age (by the late 1970s she had turned 65), although rhythm and movement are still a vital ingredient in her work. Almost all her early colour work was stolen in 1970 when a burglar broke into her apartment, after which Levitt returned to the streets to produce yet more colour photos.
In 1943, Beaumont and Nancy Newhall produced the first solo exhibition of work by Helen Levitt at the Museum of Modern Art in New York. In the 1940s Levitt also made two films, The Quiet One and In the Street. Levitt has published several books, including A Way of Seeing (1965), In the Street (1987), Crosstown (2001) and Slideshow (2005).
This year Levitt received the SPECTRUM prize, the Internationaler Preis fьr Fotografie der Stiftung Niedersachsen, which was accompanied by a new book: Fotografien 1937-1991. Levitt (95) has been photographing for almost 70 years and currently lives in relative seclusion in New York.