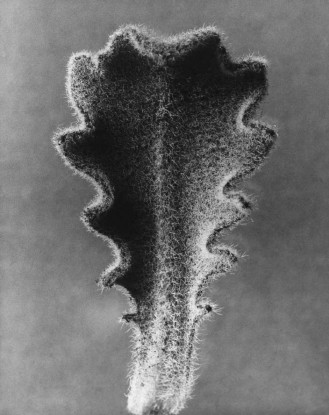 Blossfeldt (Germany, 1865) was self-taught and since his youth a great lover of nature. As sculptor and modeller in a foundry for artwork, he used flowers and plants as inspiration for decorations. His participation in a study project in Italy under the guidance of Moritz Meurer in the 1890s became a turning point in his career for it was during this project that Blossfeldt began to systematically collect and photograph plants.

His documentation served an artistic rather than scientific purpose. Blossfeldt wanted to study archetypes of nature through means of photography. Just as his teacher Meurer, he believed that archetypes were a source of inspiration for architecture, drawing and painting. Blossfeldt photographed flowers and other plants with the aid of hand-made large-format cameras. He had a preference for weeds, which he felt illustrated archetypal nature better than cultivated flowers and plants. He also documented flora during various stages of development, pruning away branches and leaves before photographing his specimens against a neutral background in close-up, to effect sleek geometric patterns. Blossfeldt is considered one of the pioneers of New Objectivity. He used his photo archive to serve his art instruction at the Berlin Kunstgewerbliche Lehranstalt. Over the course of his life Blossfeldt made about 6,000 exposures.

This exhibition has been made possible thanks to the SK Stiftung Kultur and Goethe Instituut Amsterdam.
www.foam.nl