Marks of Honour - A Striking Library 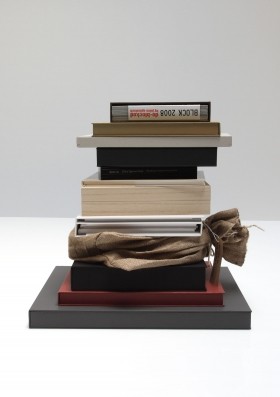 Marks of Honour – A Striking Library is a homage to the photo book. The exhibition shows the inspiration a new generation of relevant photographers has had from the history of photography in the form of books. The photo book is a source for artistic inspiration and creative reference, especially since Robert Frank published his Les Amйricains in 1958. Photography in books has not only influenced collectors and curators, but also generations of photographers.
Thirteen international photographers were invited to choose a photo book, which was influential to the formation of their work, and to pay it artistically homage. All participating works contain the original photo book and its complementary ‘homage’. Besides the original works the exhibition consists of multimedia presentations, photographs, drawings and reproductions. Foam is the first museum to present this stupendous library.

Marks of Honour was initiated by Markus Schaden (Schaden.com photobookshop, Cologne) and Willem van Zoetendaal (Van Zoetendaal Gallery, Amsterdam) in 2005. In 2005 there have been invited forty-one international photographers to choose a photo book which was influential to the formation of their work, and to pay it artistical homage. The resulting works have been shown in Amsterdam at Foam and at the Van Zoetendaal gallery. The basic concept remains the same. In Marks of Honour – A Striking Library there are only thirteen photographers participating, to obtain a higher focus. A catalogue will be published by Schaden.com. This project has been organized by Nina Poppe and Verena Loewenhaupt, supported by ArtBookCologne and Schaden.com photobookshop.
www.foam.nl