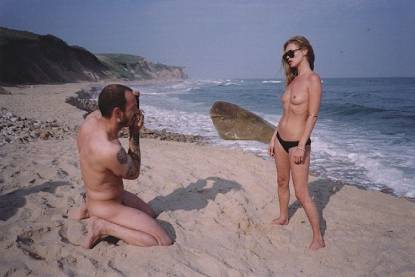 Foam_Fotografiemuseum Amsterdam presents ‘The Kate Show’. An exhibition focusing on style icon, super-model and muse Kate Moss and revealing how the personality of a public figure is shaped by the media and becomes our collective public property. Although the image of Kate Moss has been a constant feature in the media over the past fifteen years, this show is far from being an ode to the model. It concentrates on the relationship between public and private life, the power and influence of the media and the common desire to shape public figures to reflect our own perspectives.

‘The Kate Show’ features items by a wide range of artists , fine, conceptual and pop artists whom were especially invited to comment on a phenomenon of the monstrous media. For example, the show includes work by photographers Terry Richardson and Mario Sorrenti who have regularly portrayed Kate for fashion and other reportages. Visual artists have also drawn inspiration, for example Andro Wekua, Adam McEwen and Richard Prince show work specially made for this exhibition.

The Kate Show is an investigation into an image that reflects an age in which the fashion world feeds the art world, and vice versa, in which photo models have become super-women and in which minor private misfortunes become inflated out of proportion into world news. The artists in this show explore the rise of a phenomenon, the effect of the media and the creation of an icon based on images. Kate Moss is the personification of an empty canvas on which everyone projects his or her own desires, ideas or frustrations.

Although Kate’s tumultuous life regularly gets her into the papers, she hardly ever gives interviews. Unlike many of her fellow models, she has no career ambitions in other areas, like film or music. She confines herself to what she’s good at: posing. As a result a mysterious aura surrounds the world’s most photographed model.

The story of Kate Moss (b. 1974, Croydon, UK) is already legend. She was only 14 when she was discovered by Sarah Doukas, founder of the British modelling agency Storm. When her first session with photographer Corinne Day for youth magazine The Face appeared, it made an immediate impact on the fashion world. In 1993 she became the face of Calvin Klein. Following the celebrated glamour look of top models of the 1980s, Kate Moss became the first anti-model, with her famous waif look. It became known as heroin chic, and was considered extremely controversial since pictures of the incredibly lean Moss supposedly encouraged young girls to become anorexic. In the late 1990s Kate Moss became one of the world’s leading models. She became extremely well known in and outside the fashion industry, working for the finest photographers and the best fashion magazines.

‘The Kate Show’ is compiled by Olivier Zahm (journalist, curator and director of Purple Institute, Paris) and Rita Ackermann (artist and curator).