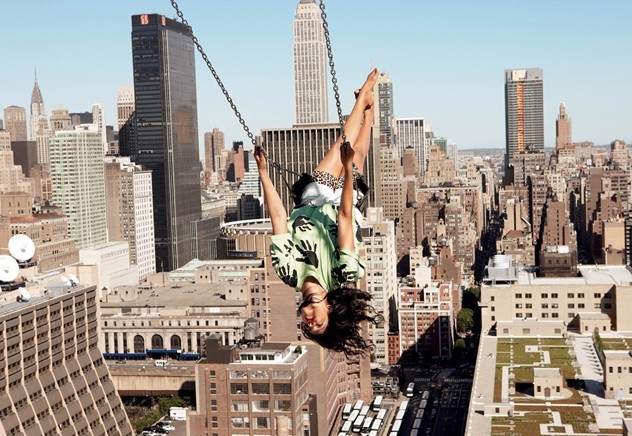 © Ryan McGinley
Maya take to the streets
THE NEW YORK TIMES MAGAZINE PHOTOGRAPHS
Co-curated by Kathy Ryan and Lesley A. Martin
23 March - 30 May, 2012

For over thirty years, the New York Times Magazine has presented the myriad possibilities and applications of photography. The New York Times Magazine Photographs is an exhibition that reflects upon and interrogates the very nature of both photography and print magazines at this pivotal moment in their history and evolution.
The exhibition is cocurated by Kathy Ryan, longtime Photo Editor of the Magazine, and Lesley A. Martin, Publisher of Aperture Books. The Aperture-produced exhibition is comprised of eleven individual modules, each of which focuses on a notable project or series of projects that have been presented in the pages of the Magazine. The featured projects mirror the Magazine's eclecticism, presenting seminal examples of reportage, portraiture, as well as fine art photography. Using visual materials drawn from different stages of the commissioning process-shot lists, work prints and contact sheets, videos, tear sheets, and framed prints-the Magazine's collaborative methodology is revealed from initial idea to the published page, and, in some cases, continues beyond magazine publication, when an exploration that began as an assignment has become a part of a photographer's ongoing work. In sum, these layers reveal the Magazine's unique position as a venue for visual storytelling and a unique forum for the cross-pollination of photographic genres.
The exhibition includes 300 objects by 37 photographers, amongst which:
Lilian Bassman, Chuck Close, Philip Lorca diCorcia, Gregory Crewdson, Thomas Demand, Rineke Dijkstra, Mitch Epstein, Lee Friedlander, Nan Goldin, Jeff Koons, Inez van Lamsweerde and Vinoodh Matadin, Annie Leibovitz, Ryan McGinley, Hellen van Meene, Jeff Mermelstein, Simon Norfolk, Paolo Pellegrin, Gilles Peress, Sebastiao Salgado, Andres Serrano and Malick Sidibe.
The book, The New York Times Magazine Photographs, published by Aperture will appear alongside the exhibition.
KATHY RYAN (editor) is the award-winning Director of Phtography of the New York Times Magazine. She has worked with the publication for more than twenty-five years; in that time, the Magazine has been recognized with numerous photography awards. Ryan received the 1997 Picture Editor of the Year Award at the Visa pour l'Image photojournalism festival in Perpignan, France; a Lucie Award for Picture Editor of the Year in 2003; and a lifetime achievement award from the Griffin Museum of Photography, Winchester, Massachusetts. In 2008 she was a cocurator of the inaugural New York Photo Festival, and in the following year she organized the exhibitions Prune: Abstracting Reality for FOAM Museum in Amsterdam and Dutch Seen for the Museum of the City of New York and FOAM. Ryan lectures widely and serves as a mentor and thesis advisor at New York's School of Visual Arts. A pioneer in combining fine-art photography and photojournalism in the pages of the Magazine, she has also recently commissioned a series of videos for the New York Times website.
LESLEY A. MARTIN (co-curator) is Publisher of the Aperture Foundation's book program. Her writing on photography has been published in Lay Flat and Aperture, among other publications, and she has edited over seventy photography books, including Reflex: A Vik Muniz Primer; Richard Misrach: On the Beach; Paris • New York • Shanghai by Hans Eijkelboom; Takashi Homma: Tokyo; Paul Strand in Mexico; and Penelope Umbrico (photographs). She was also the contributing editor to Japanese Photobooks of the 1960s and '70s, winner of the 2010 Historical Book Award at the Recontres d'Arles. In 2008, she was named one of the fifteen most influential people in photo-book publishing by PDN and was one of the inaugural curators for the New York Photo Festival. In 2010, under Martin's leadership, Aperture Foundation received recognition as Publisher of the Year by Photo España, Madrid.
The New York Times Magazine Photographs is organized by Aperture Foundation, New York. The exhibition is cocurated by Kathy Ryand and Lesley A. Martin.
This project is supported in part by an award from the national Endowment for the Arts.
www.foam.nl