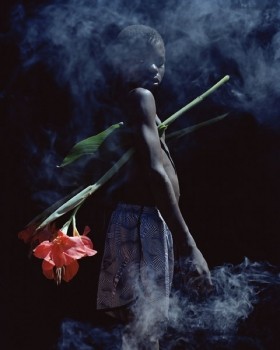 Foam presents an extensive survey of recent photos taken by Viviane Sassen while travelling through various parts of Africa. On one level these photos are an attempt by Sassen to recapture her childhood years in Africa, yet they also pose implicit fundamental questions about image, bias and the constraints of the photographic medium. Many of the portraits that Sassen made in countries like Zambia, Kenya and Tanzania were realised in intuitive collaboration with the subject. They are remarkable for their use of colour, for the idiosyncratic use of shade and their slightly surreal atmosphere. Sassen’s work contrasts sharply with Western stereotypes of Africa and its inhabitants. The exhibition features work for which Viviane Sassen won the 2007 Prix de Rome, together with new and previously unshown work.
Many of the photos in Flamboya are portraits of young Africans in which the immediate setting plays an essential role. Remarkably, however, it is often impossible to see the subject’s expression: the face and parts of the body are often wrapped in shadow, turning away from the viewer or only the legs and torso are visible. This makes it hard to identify with the subject in the photo. The (in)ability to properly register a person’s identity, the limitations that prevent the viewer forming a real picture and role photography plays in this is a recurring theme in Sassen’s work. She plays an intriguing game with perception, undermining our assumptions and stereotypes.
Viviane Sassen spent part of her childhood in Kenya where her father worked as a doctor. Years later, long after her family had returned to Holland and after Viviane had already begun working as a fashion photographer and independent artist, she returned to the continent of her earliest childhood memories. Her confrontation with Africa and the many questions that arose as a result led in 2002 to her Cape Flat series, made mainly in South Africa. Later, she produced the series of photos presented here under the title, Flamboya.
The exhibition is accompanied by a volume entitled Flamboya, pulished by Contrasto, featuring a story by Moses Isegawa and an essay by Edo Dijksterhuis.
Viviane Sassen (b. 1972) studied fashion design at Arnhem College of Art and photography at Utrecht College of Art. Besides producing independent work, Sassen has also worked as a fashion photographer and established a name with her own unique work for labels such as Diesel, Miu Miu, So, Kuyichi Jeans, Evisu. Sassen has also produced work for leading magazines such as I-D, Another Man, Vogue France and Purple. Viviane Sasssen is represented by Motive Gallery, Amsterdam.
Flamboya, by Viviane Sassen can be seen from 21 November 2008 to 18 January 2009at Foam_Fotografiemuseum Amsterdam. Open daily 10.00-18.00, Thurs/Fri 10.00-21.00. Tickets: Ђ 7.00 (as of 1 January 2009: Ђ 7,50)
Note to editors: For information and visual material please contact Merel Kappelhoff (communications), e-mail merel[AT]foam.nl or phone +31 (0)20 5516500.
Foam is sponsored by the BankGiroLoterij and the VandenEnde Foundation.
www.foam.nl