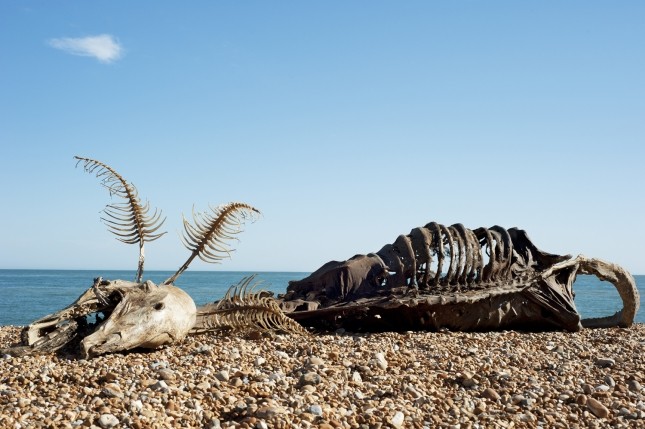 The Folkestone Triennial is one of the most ambitious public art projects ever to be presented in the UK. 19 international artists have been invited to develop new works for Folkestone’s streets, squares, beaches and historic buildings to create a cutting-edge contemporary art exhibition in one of Britain’s best-loved seaside towns.
Projects include Folkestone’s answer to Copenhagen’s Little Mermaid, Cornelia Parker’s sculpture cast from a real life Folkestone resident; Martin Creed’s sound work for the town’s Leas Lift; Cristina Iglesias’ magical Martello tower passage, Hew Locke’s flotilla of model boats suspended from the roof of St Mary and St Eanswythe Church; A K Dolven’s Untuned Bell ringing out against the sea and sky; and Charles Avery’s mysterious sea monster.
Andrea Schlieker, curator of the 2011 Triennial, said: ‘We are delighted that the Triennial has had such an enthusiastic response from local, national and international visitors. The town is buzzing as people are taking advantage of the new High Speed train to Folkestone. Nowhere else in the UK can you explore a charming seaside town while experiencing new works in evocative surroundings by internationally celebrated artists.’

The Folkestone Triennial 2011 was curated by Andrea Schlieker, freelance curator, lecturer and writer. Having conceived and curated the inaugural Folkestone Triennial ‘Tales of Time and Space’ in 2008, she recently curated Mark Wallinger’s ‘Sinema Amnesia’ for the My City public art project in Turkey (2010-11). She was co-curator of the British Art Show 6, and has a long track record in curating national and international exhibitions as well as major public art projects. A member of the Public Realm Commissioning Advisory Panel for the Olympic Park, Schlieker was also a juror for the 2009 Turner Prize. She lectures regularly in Britain and abroad.
www.folkestonetriennial.org.uk