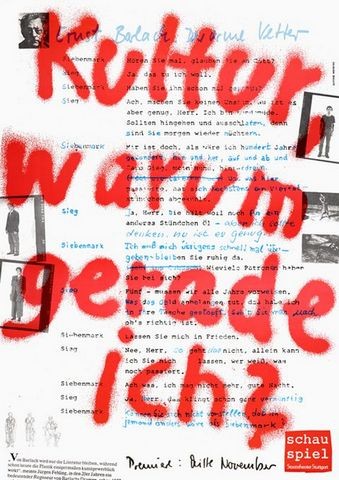 Helmut Rottke (born 1940 in Berlin) and Reinhold Scheer (born 1943 in Itebej) created numerous poster campaigns for the theatre together. Their intelligent and provocative pictorial and textual messages have always attracted attention, even going as far as to cause scandal.

They have worked closely with Düsseldorfer Schauspielhaus for several years, indeed their career as theatre poster designers started here in 1986 with a provocative campaign for Peter Brook's production of Carmen. The surprising and unconventional qualities of Rottke & Scheer's oeuvre departed from the traditional approach of theatre poster advertising in several ways and embarked on new paths:

Rottke & Scheer applied the same criteria to theatre advertising as to product advertising – the objective is to entice people to buy or consume a product. Success proved them right, as with this sort of advertising theatres also attracted audiences beyond the target groups that had previously been attracted. Among others, theatres in Düsseldorf, Stuttgart, Wuppertal, Recklinghausen and Essen benefitted from this feature.

The often idiosyncratic interplay between copy and design also played a significant role in the impact of their works. At times the design seems to withdraw behind the written word, at others it supports it, while at others again the written word seems to be competing with the image; at any rate, a range of scenarios is created that involves the viewer’s response, provoking rejection just as much as it triggers approval.

The exhibition showcases a cross-section of the Rottke & Scheer campaigns for various theatres between 1986 and 2003.

A catalogue has been published by Folkwang/Steidl.