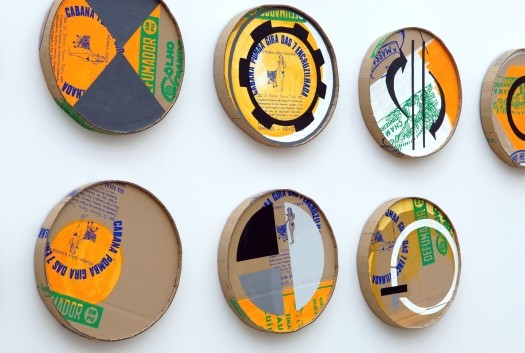 In a special presentation, the Museum Folkwang is showing important new acquisitions of contemporary art for its own collection since 2006, which will complement the permanent exhibition of art after 1945 in the new building. In the center are works which were acquired for the Museum Folkwang thanks to the generous donations and support of artists, foundations, collectors and patrons, and which are now being shown for the first time.

The title of the exhibition is taken from the large installation by Martin Kippenberger, Tankstelle Martin Bormann, which the artist made after his trip to Brazil in the winter of 1985/86. Kippenberger, among the most important artists of his generation, creates a supposed workplace and cover address with his "Gas Station" for one of the most important Nazis, Hitler’s private secretary Martin Bormann, who was sentenced to death in absentia during the Nuremburg Trials. It would seem that Bormann committed suicide in Berlin at the beginning of May, 1945; his skeleton was found in 1972 and later identified. For a long time, however, rumors were in circulation that Bormann, like many other Nazi officials, had fled to South America and was in hiding there. With this installation the collection was able to acquire a major work by this artist, a native of Essen, for the first time.

Among the other major works is the film or frieze-like sequence Garbage Day, consisting of three hundred panels, by the artist group The Royal Art Lodge: Spontaneous, humorous drawings and paintings, made in a collective effort and inspired by comedy.

In the middle of the Garbage Day room is the sculpture SleepStudySkull, 1996, a survival capsule in the form of an abstract skull, equipped with a bed, lamp and table. It represents an early work by the Dutch artist collective Atelier Van Lieshout, which develops its work as a hybrid mixture of installation, spatial work, furniture and sculpture.

The Photographic Collection is showing photographic works by Rudolf Bonvie, who also explores the relation between text and press images.

On show in the area of Graphic Arts are a 32 part series by the American Terry Fox, who lived in Europe for a long time, as well as two large format drawings by the American artist Roni Horn.

In the first room of the special presentation, visitors encounter a work by Christin Lahr, which will last her lifetime – Macht Geschenke. Since 31 May, 2009, the artist has transferred 1 Cent to the Ministry of Finance every day to help reduce the national debt. In the "reason for payment" box of the transfer application she writes 108 characters from Karl Marx’s Das Kapital each time.
Our most recent acquisitions, two paintings by the American Terry Winters, will also be on display.