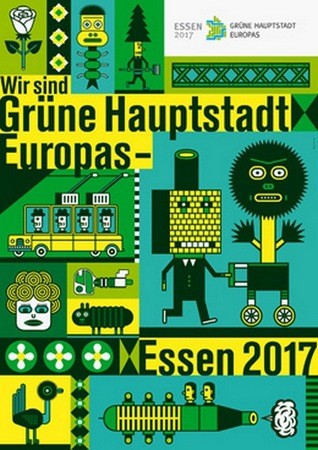 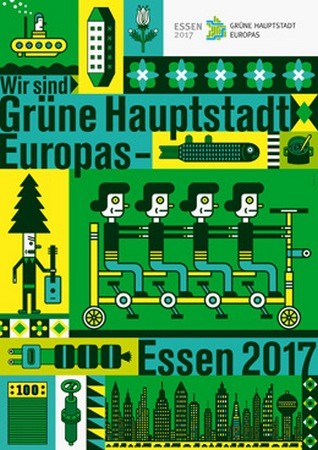 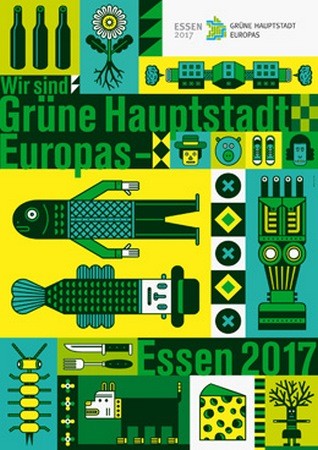 The project office “European Green Capital – Essen 2017” and Museum Folkwang have jointly launched a poster competition. Ten renowned designers from Austria, France, Germany and Switzerland were invited to take part. The objective in selecting the designers was to gather approaches for the visualization of the topic that were as strong and as different as possible. In addition, a group of students at Folkwang University of the Arts, led by Prof. Heribert Birnbach, also took part in the competition.

The participating designers interpreted and portrayed the three topic areas of “rethinking”, “change” and “movement” in very different ways.

The jury unanimously voted in favour of Berlin-based Henning Wagenbreth’s highly original poster series. “He illustrated the attitude to life in the Green Capital in a bold, exceptionally lively and eye-catching way. We would like to congratulate the winner and thank all participants for their contributions,” stated the jury chaired by Uwe Lösch.

The winning series by Henning Wagenbreth will be displayed across the city of Essen throughout 2017 – both as individual posters and as a series – parallel to the main advertising activities for the event.

A group of 14 students at Folkwang University of the Arts, Essen contributed to the competition for emerging talent. Deutsches Plakat Forum e.V., the association of the friends of the German Poster Museum, awarded a prize for the best student work.

The prize bestowed by Deutsches Plakat Forum e.V. went to Jennifer Jäger and Linda Knott, who impressed the judges their series entitled “C”. The work impressed the association members with its unsettling contradiction between text and image, and the way it critically yet constructively raised questions and demanded answers.

A catalogue will be published by Steidl Verlag.