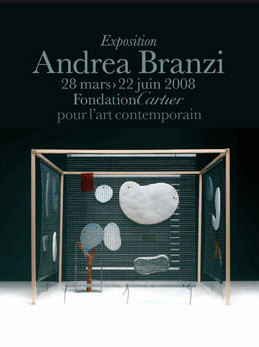 Andrea Branzi, one of the most influential Italian architects and designers working today, will present two ambitious new installations created in collaboration with the CIRVA (1), specifically for his exhibition at the Fondation Cartier. Realized in glass and metal interweaved with natural elements such as branches and flowers, these installations, immersed in the musical environment of Patti Smith, create a dialogue with the architecture of Jean Nouvel’s building. Fragile, delicate and poetic, these hybrid structures express what Andrea Branzi has called “a weak and diffuse modernity” where the translucent, the transitory and the flexible become the guiding concepts for architecture and design in the 21st century. After exhibiting Ron Arad, Marc Newson, and Alessandro Mendini, the Fondation Cartier confirms its ongoing commitment to design through this commission to Andrea Branzi.

Reinventing architecture
The installations presented at the Fondation Cartier have evolved out one of the designer’s major preoccupations: how may we reinvent architecture following its demise? He argues that modern architecture, with its emphasis on closed form and definitive function, has not only lost touch with “the intimate needs and behaviour of users” but also with the general needs of a “fluid” society based on electronics and services. Embracing the opposing realities of the natural and the artificial, the industrial and the handmade, the work of Andrea Branzi strives to reflect the complexities of contemporary society, encouraging viewers to rethink their relationship to the built environment.


“A weak and diffuse modernity”
Jean Nouvel’s building provides the most conceptually appropriate environment for these installations. Just as Andrea Branzi’s permeable structures strive to blur the boundaries between interior and exterior, Nouvel’s sheet glass façades deny the reading of a solid volume, creating a dialogue with the surrounding wildflower garden. For Andrea Branzi, it is this blurring of boundaries that best expresses our contemporary reality. Eliminating the traditional distinctions between inside and outside, form and function, the natural and the technological, these two installations suggest a new conceptual approach to architecture and design. They are metaphors for an architecture of the future, no longer based on the idea of spectacular verticality, but on light, flexible, ephemeral structures that fully incorporate the “weak and diffuse” energy of nature and its seasons.


BIOGRAPHY
Born in Florence in 1938, Andrea Branzi has been involved with many progressive elements of Italian design since the late 1960s. As one of the founding members of Archizooom Associates (1966-1974), he played a major role in the radical architecture movement, which inspired a whole generation of architects such as Frank Gehry, Rem Koolhaas and Daniel Liebeskind. In the 1970s and 1980s he also participated in important avant-garde groups such as Studio Alchymia and Memphis. A prolific writer and critic, he was one of the co-founders of the world-renowned design school, the Domus Academy in Milan, of which he was the director and vice president for ten years.

For his career contributions in the fields of design and design theory, he was awarded the prestigious Compasso d’Oro in 1987. He is currently Professor and Director of the graduate program of Interior Design at the Politecnico di Milano, and Curator at the Museo del Design di Milano.
www.fondationcartier.com