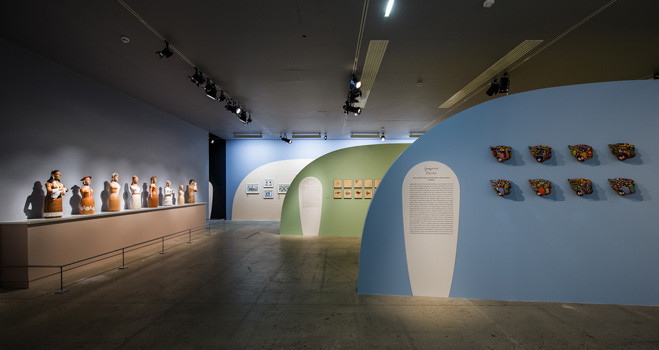 On view from May 15 to October 21, 2012, the exhibition Histoires de voir: Show and Tell presents the works and narratives of over 40 painters, sculptors and filmmakers from around the world. They are Brazilian, Indian, Congolese, as well as Haitian, Mexican, Danish, Japanese and American. They hail from the urban centers of Paris and Port-au-Prince, or the rural communities of the Amazon and Madya Pradesh. They emerged as artists and developed their talents in uncommon circumstances; they have often been considered as naïve artists and have rarely been invited to exhibit their works in contemporary art institutions.

From Another Angle
Show and Tell arose from a desire to explore the meaning of the terms “naïve” “primitive” and “self-taught” art, to meet artists who pursue paths outside the norm of conventional visual codes, and to examine the relationships between contemporary art and folk art, artist and artisan. This exhibition strives to free up the eye, to view from another angle, to give voice to artists and communities of artists who look upon the world with wonder. It is of and by women and men for whom art “has close ties with the hypersensitivity of the heart” and whose works are “living documents,” in the words of Alessandro Mendini, the Italian architect and designer who curated the exhibition.

The Artists’ Voice
Including over 400 works, accompanied by videos and texts that provide insight into the artist’s work, this exhibition reveals the many correspondences that exist between works emanating from different geographical regions, belief systems and cultures. Indeed, despite a great diversity of styles, they share many common features such as exuberance of color, distortion of scale and perspective, stylization of form. Equally dominant is the representation of animals and nature and the importance of the realm of dreams and the imaginary as a source of inspiration for the work. Show and Tell celebrates those who venture off the beaten track in search of new artistic approaches, suggesting that other forms of contemporary art are indeed possible. It is testimony to the creative power of artists for whom painting, filming, drawing, and sculpting are a way of understanding and experiencing the world.
www.fondationcartier.com