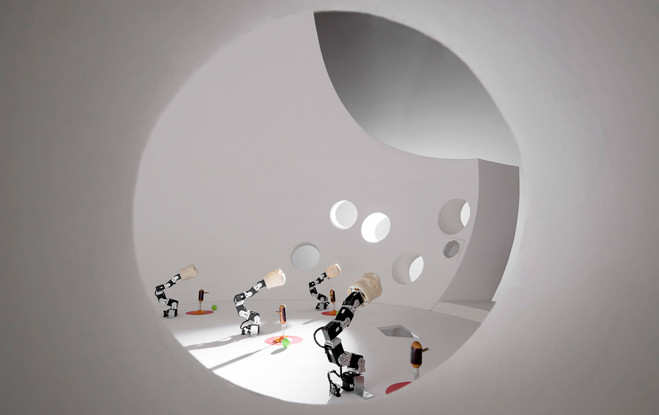 Mathematics: A Beautiful Elsewhere is a unique exhibition created by the Fondation Cartier pour l’art contemporain with the aim of offering visitors, to use the mathematician Alexandre Grothendieck’s expression, “a sudden change of scenery.” The Fondation Cartier has opened its doors to the community of mathematicians and invited a number of artists to accompany them. They are the artisans and thinkers, the explorers and builders of this exhibition.

They were accompanied by nine artists chosen for their exceptional ability to listen, as well as for their great sense of curiosity and wonder. All of these artists have exhibited at the Fondation Cartier in the past: JEAN-MICHEL ALBEROLA, RAYMOND DEPARDON AND CLAUDINE NOUGARET, TAKESHI KITANO, DAVID LYNCH, BEATRIZ MILHAZES, PATTI SMITH, HIROSHI SUGIMOTO and TADANORI YOKOO, as well as Pierre Buffin and his crew (BUF). They worked together to transform the abstract thinking of mathematics into a stimulating experience for the mind and the senses, an experience accessible to everyone.

The exhibition was developed in association with the Institut des Hautes Études Scientifiques (IHÉS) and under the patronage of UNESCO. It was coordinated by Hervé Chandès (General Director of the Fondation Cartier), Jean-Pierre Bourguignon (CNRS Research Director and Director of IHÉS), Michel Cassé (astrophysicist, CEA Research Director and Associate Researcher at IAP), with Giancarlo Lucchini, Thomas Delamarre and the entire staff at the Fondation Cartier. Visitors may continue to experience this “sudden change of scenery” via the exhibition catalog, an iPad application, the Fondation Cartier website, as well as by attending a series of events, the Nights of Uncertainty. Mathematics: A Beautiful Elsewhere is a geometric, algebraic, artistic and cinematographic mosaic that gives everyone a chance to experience fragments of mathematical beauty.