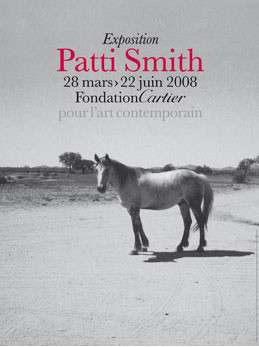 The Fondation Cartier is hosting a major solo exhibition of the visual work of American artist and performer Patti Smith. Drawn from pieces created between 1967 and 2007, it strives to provide an insight into her lyrical, spiritual and poetic universe. Her expressive voice serves to magnify the installations created specifically for the exhibition: a synthesis of photographs, drawings and films.

While the name Patti Smith evokes an image of a founder of the New York punk-rock scene, she has explored the visual arts and poetry since the late 1960s. The exhibition at the Fondation Cartier embraces the various facets of her creative process. Patti Smith began to take photographs in 1967 for use in collages. In 1995, she returned to photography using a vintage Polaroid Land 250: “The immediacy of the process was a relief from the long involved process of drawing, recording, or writing a poem.” Many of Smith’s photographs embody significant personal meaning: Robert Mapplethorpe’s slippers, Virginia Woolf’s bed, Hermann Hesse’s typewriter and Arthur Rimbaud’s utensils. Others serve as a visual record of her well-traveled life. The exhibition also features a selection of the artist’s drawings, several of which are borrowed from prestigious institutions such as the MoMA and the Centre Pompidou or from private collections.

The powerful yet subtle drawings have been executed with a calligraphic sense of line entwined with poetry and text. They represent her solitary side. Her collaborative side is represented in films directed by Robert Frank, Robert Mapplethorpe and Jem Cohen and the audio performance of The Coral Sea with Kevin Shields. She will shoot a short film, specially commissioned for the exhibition. The exhibit also includes cherished belongings taken from her personal archives. Among them original manuscripts, a photograph taken by Constantin Brancusi and a stone from the river in which Virginia Woolf committed suicide.


Inspirations
The source of much of her inspiration has been key figures of French culture, including Arthur Rimbaud, Nicole Stéphane, Jean Genet, Antonin Artaud and René Daumal. Paris echoes throughout, from drawings executed in the Montparnasse district, where she lived during her first Parisian sojourn in 1969, to recent photographs taken in the garden of the Fondation Cartier, situated nearby.


A Comprehensive Project
To reflect the multitude of fields explored by Patti Smith, the exhibition is intended to be a comprehensive project that expands beyond the exhibition space. The Fondation Cartier is giving free rein to Patti Smith to oversee the
programming for the Nomadic Nights as well as performing herself, offering solo and band performances as well as informal poetry readings. The Fondation Cartier’s bookshop will, for a time, become the artist’s personal library. Her choice of books, CDs, films and objects will enable visitors to further penetrate the rich universe of this iconic artist.
www.fondationcartier.com