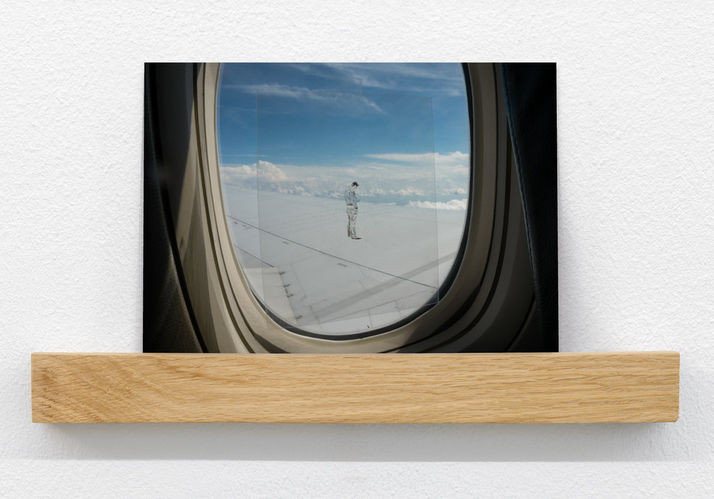 Claire Harvey is known for painting figures from photographs, photographing painted figures in-situ, painting figures on glass, acetate, post-it notes, Scotch tape, and directly on the gallery wall, while incorporating every last fixture and edge of material in a prismatic interplay between image and object. Her layers of sculpture, photography, acetate, oils, and site specific installations are collages of material that the figure both pins to the surface and, like an intricate key, unlocks a landscape beyond their literal, physical firmament. Rather than forcing us to flip flop between looking with the left and right brain, Harvey's artful compositions elegantly balance the real and illusory, evoking a curious quality throughout her work, the simultaneous suspension of disbelief and belief.

The 'By the Way' Postcards that greet the visitor provide a perfect introduction to the layers of surface, image and object in Harvey's work. The views from planes, trains, and buildings provide a makeshift easel in which a figure, pre-painted on acetate, is inserted into the scene. We travel with unnatural ease through the regulated material of the postcard, passed the surface of the picture plane, through the camera's lens, the figure's acetate, and out the window frame. It is only by adopting the figure along the way, and transposing our perspective can we transform the photograph into something more akin to a painting. As
we collapse every surface back into the ink and coated pulp of the postcard, the figure remains, unfolding an entirely new re-imagined dream-like space.

'Sticky water', on the far side of the main gallery, presents us with a constellation of figures, painted on small strips of Scotch tape, stuck and spread across much of the wall. Given the title, one can't help but think of raindrops as their sheen catches the light when entering the space, yet, upon closer inspection, every character is painted as if half submerged in water and placed as if receding into the distance. Beyond the surface of the wall, beyond even the white void through which they wade, these isolated figures create an entirely imaginary perspective plane into which they collectively navigate, as if drawn by a current towards an unknown vanishing point. Whatever your views on the world's future with water, Harvey has created a wonderfully inviting metaphor for a multitude of interpretations, a great yet weightless Ark for individuals and ideologies alike.

On the opposing wall, 'The Catch', inhabited by a swirl of figures, as if swept up in a gust of wind, reflects and refracts some of the themes from 'Sticky water'. The picture plane is now locked to the physical surface and the figures painted directly on the wall. Rather than imagine an invisible perspective plane uniting the work's figures, we are led to link them to an invisible trapeze. As the figures attempt to connect and catch each other, we perform our own mental gymnastics, creating our own mechanical circus spun from the physical screws that plot its pivots and pendulums, like an invisible hand catching them all in a causal web of time and motion.

Harvey is non-prescriptive in the meaning or morality of her work, allowing the viewer's own politics and insight to inform the narrative. Instead, 'By the Way' is a finely placed and well balanced set of stepping stones, frameless asides along a contemplative journey, and a reminder that only with imagination can we travel with and beyond the surface of things.