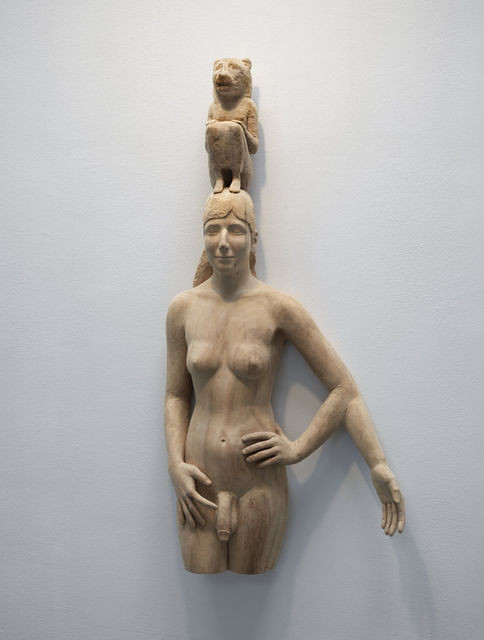 As the title of this exhibition might suggest, there’s a strange sense of removal in the works of Femmy Otten, a removal that at first seems to be a melancholic yearning for past times. In her soft oil colored painting "The eternal hunting field" (2014), a female figure mysteriously multiplies while hovering over a pastoral landscape. In "And I began to forget where I came from" (2014), a figure, both male and female, is carefully carved in wood. Standing solitary and confident, almost totem-like. The strange animal on its head adds to the mystery. In another painting, an almost classic scene of a large tree is juxtaposed with a floating set of knifes. Otten effortlessly combines archaic (art historical) references with a renewed and unknown sense of symbolism.

Mythological creatures and abstract emblems, domestic elements and distant gazes combine in an unsettling and atmospheric iconography. Otten’s figures slowly emerge from canvas, from wood, from plaster, un-smoothed, not fully formed, in estranging situations and conversations with other-worldly creatures.
Upon entering Otten’s carefully composed universe, past, present and future seem to lose their validity as terms for understanding. Caught between the process of emergence and petrification; figures, landscapes and symbols seem to evade our contemporary vocabulary, and demand a more associative reading of what is and could be, of here and there.
www.fonswelters.nl