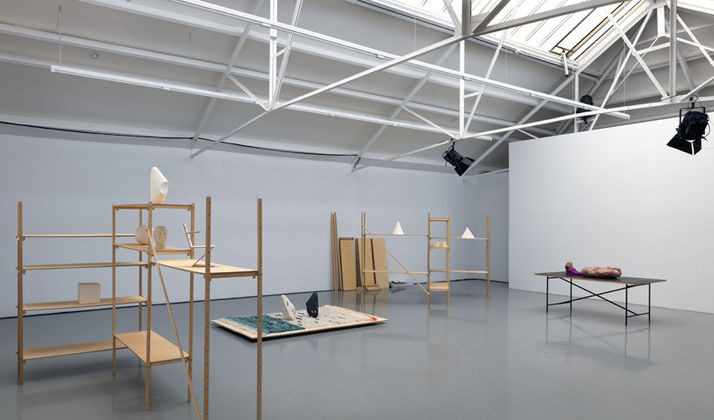 Thinking and talking about processes of making form the main material in Hedwig Houben’s work. In an equally playful and critical way, through performance lectures and videos, Houben attempts to explain the artistic process and characteristics of objects. With that, it is the objects themselves who, as living characters, usually take the floor.
The video ‘The Good, The Bad, The Happy, The Sad’ (2014) for instance, is the registration of a recent performance by Houben in the Oude Kerk in Amsterdam, as part of the performance programme ‘The Artist Speaks, and sequel to her series ‘About the Good and the Bad Sculpture.’
“Hello. This talk begins after an experiment that happened some months ago in the artist’s living room. Right in the middle of a carpet, that’s where she put us and that’s exactly where we still stand. We, being the Good and the Bad Sculpture.”
Lying on a carpet, behind a black and a white sculpture, both polyform and made of plasticine, Houben presents a dialogue between the two objects. They reflect on their maker, the viewer and themselves; the creation. This time, they do not only question their artistic quality, but above all ask themselves and each other how to behave. How does a creation survive? And who is ultimately the most powerful player – the artist, the art work or the spectator? While Houben speaks – careful and decisive at the same time – her hands thoughtfully touch the sculptures; they feel, stroke, scratch. They pick small pieces off of one object, rubbing it on the other, making the two resemble each other only slightly more.
During the opening of her second solo exhibition at Galerie Fons Welters, Houben will present a new performance lecture: ‘The Hand, The Eye, It and the Foot’. In this work, reason and intuition hold a conversation. This way, different moments from her works’ process of coming into being, will meet in the gallery space: both the performance’s live moment and the video documentation, as well as the real sculptural objects she has made, who act in, and arise from them. Furthermore, she introduces a new actor; the collector. Presenting itself in the form of a modular shelves system, it exhibits a collection of models and copies of characters from previous works, such as the ‘Rietveld chair’, ‘the Good and the Bad Sculpture’, and the new character ‘the Foot’. While usually Houben acts all parts herself, this time she creates the conditions to then hand the work over. As for the course of the exhibition, the collection will be activated by the gallery staff, daily re-installing and rearranging the elements, creating a direct interaction with the characters.
As variable as the soft plasticine’s character, Hedwig Houben’s work refuses to present us with definitive statements. Houben mainly asks questions, shows doubts and possibilities, so that concepts such as the ‘artist talk’ and the ‘retrospective’ take on a rather idiosyncratic shape.

During the opening of the exhibition, Saturday 31 January at 5.30pm, the performance ‘The Hand, The Eye, It and the Foot’ will take place.