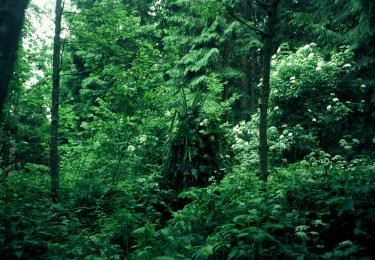 MELANIE BONAJO & KINGA KIELCZYNSKA
"The culture that does not exist "

In the forests of Eastern Poland, a sacred cult has formed that has withdrawn from the outside world and worships Mother Nature. Living in houses made of growing plants, its members have turned their backs on the modern world. These eco-extremists believe that the origins of humankind lie in plant life, and seek to reverse evolution by living like plants. Far from the hectic life of modern society, they celebrate the existence of the forest in a spiritual way, with special altars and mystical ceremonies.

In their Playstation show, Melanie Bonajo and Kinga Kielczynska provide an absurdist demonstration of our relationship with Mother Nature. They exhibit photos of people dressed as plants in the dark forests of Poland, people who believe themselves to be one with their forgotten natural habitat. We also see an installation made of the natural waste found in the forest and a video of the everyday goings-on of the cult members amid the trees; we are even allowed to witness one of their secret ceremonies.

In modern society, nature has become a subordinate product amid a wealth of other products, and people have become alienated not only from their natural surroundings but also from their own nature. In an attempt to reverse this process, Melanie Bonajo and Kinga Kielczynska explore the extent to which it is possible for us to re-insert ourselves into the holistic system. In the radical reversals of the Polish cult, a near-religious refuge has been created that denies progress. The artists adopt a documentary-like presentation, showing us a glimpse of this outlandish community, absorbed in a quest for something that may in fact never have existed. The cult members have relinquished control over their lives, hoping that a lost intuition will take over. This is certainly an extreme variant of ‘Back to nature!’
www.fonswelters.nl