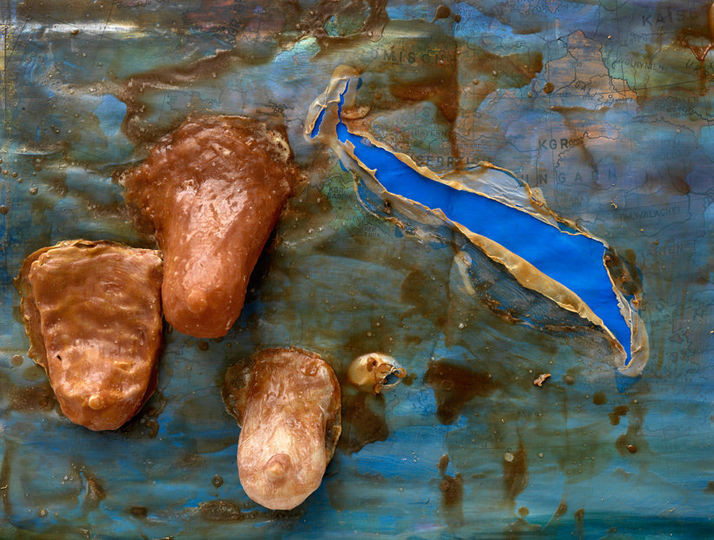 Motherland – mapping out our territory, not forgetting that maps are plans, object spaces made to be seen or read. The breast is one of two prominences found on the upper ventral region of the torso of female and male primates. A prominence is a large, bright, gaseous feature extending outward from the Sun’s surface, often in a loop shape. In females, it serves as the mammary gland, which produces and secretes milk and feeds infants – you are what you eat. The opposition between inside and outside, between eater and eaten, is not reciprocal, but culminates in a process of ingestion that ultimately transforms our identity. Reproduce and keep making more, more for more, more more more sucking, taking everything we need from another human being, pissing on our patches so no one else can lay there, sucking from our mothers and all they can do is stay there, a nipple giving life and then we send it off to daycare.

Destruction as being born into being denying the pleasure the explosion destruction of the female motherhood hurling her into a female being emotion and hormone seeping through the skin finding its ways to excrete through tears and urine blood and milk milk being sucked in by the baby taking in its mother taking more and more and more until it’s sick and you’re left with nothing the soul clamps as the baby sucks and grows bigger and bigger into this beautiful being that walks all other animals walk when they are born we crawl we lie we suck we stare at our mothers hoping they can comfort us feed us hold us and you do because the feeling of doing nothing about this being is even more of a nothing but the world turns out to be a contradiction the ugliness the freedom the bicycles and the girls that get on them the ease the discomfort only makes you hold your baby harder and allow it to suck some more whilst watching a woman with tassels shake her titties for a man to ejaculate on to explode whilst the milk drips from your nipple and the baby sleeps in your arms breathing softly destruction as coming into being double standards for honoring and debasing women for their reproductive powers conceptualizing the earth as a mother Mother Earth Mother Nature Mother Land Mother Tongue fear worship abuse.

The sucking stops and man is nowhere to be seen the bicycle girls move so fast and patience wears thin but the hair still grows – we end up eating ourselves and our children producing more to keep the wolf from the door.

Taking it too far and then wanting to disappear, hanging there, crossing borders and drowning on the representation of the in-between, claiming space, claiming land having power, do nothing but emphasize the conditions of micro-worlds of territories, skull as compass: all the secret fluids and internal memory-oceans aligned by force of desire, you can taste it.