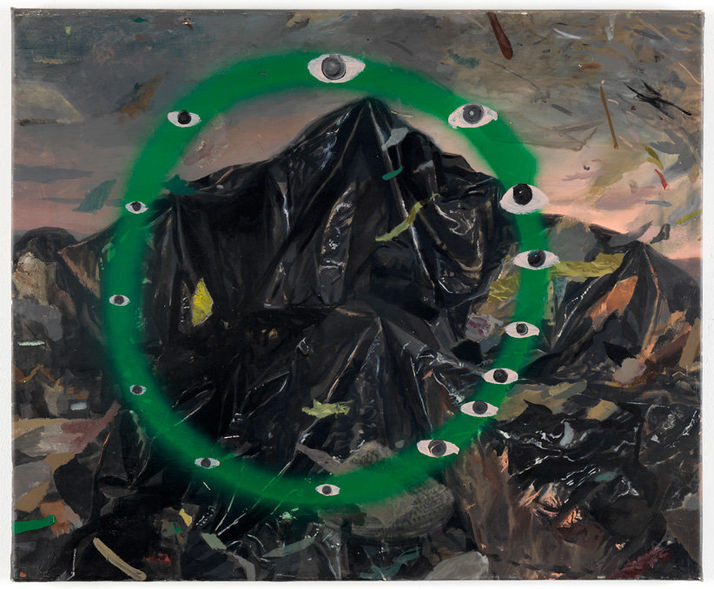 They don’t give you a watch; you’re the gift,
you’re the birthday present for the watch.
Julio Cortazar

An unusual German title welcomes you to the new solo exhibition by Pere Llobera (Barcelona, 1970) at Amsterdam’s Galerie Fons Welters. In theory, Unter dem Pantoffel stehen is a regular type exhibition; in other words, it is a collection of recent works that define the moment and the current concerns of the artist. A quick glance will strengthen that feeling. From a formal point of view, its contents do not show a central thesis, unifying and domesticating our perception of it. As is expected of his work, we sense the strong predominance of the figurative, recognize his style, even his personal imaginary; but something —the same that happens with the title— is off. Somehow, each painting brings a certain amount of resistance to the conventions of representation; somehow, pictorial reenactment revolts and turns against itself.

Accordingly, the underlying activity of such Germanic expression —the sudden contempt, the scolding appearance of a raised slipper— works as guideline to an exhibition, which, perhaps, more than ever before in the trajectory of the artist, puts into question the representational function of painting through two blunt messages: the transgression of its narrative condition on the one hand, and, on the other, the symbolic connection to the real, which is not so much the result of the formal but that of beliefs.

Following that scheme, but free – at the same time – of the things we usually find in figurative paintings (basically: people, scenarios, actions...), Unter dem Pantoffel stehen generates a context of latent tension and uncertainty that persists in all works as the result of laying off, suppressing or negating the expected form. This implies a complete disappearance, one that unsettles and seduces at the same time, while it poses, stoically, a difficult question to answer: Who should take responsibility of the representational action?

In short, in Unter Dem Pantoffel stehen, everything is recognizable, but all seems to be shifting towards another dimension, a dimension where the established codes of the act of looking are blurred and fantasizes about a flexible environment in which, happily, any of the participants, both the artist and the viewers, can, at any moment, be hit by a slipper for having missed the script. We are all, in fact, under the threatening rule of the slipper.
www.fonswelters.nl