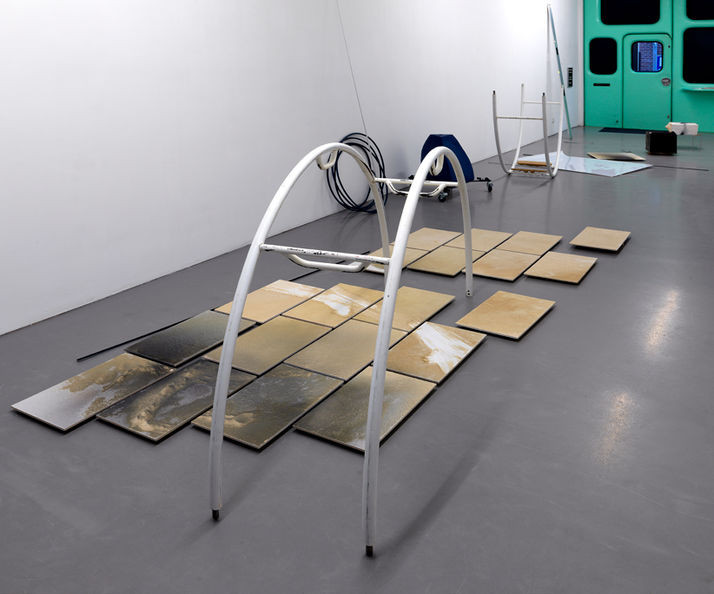 ‘Performativity is the key word in Ruta Butkute's works. If nothing else, every object that she appropriates or creates, assumes a specific role in her installation. Dancing around each other – occupying the whole length of the exhibition space – the objects ask to be identified, to be separated from each other. But on closer look, they for the most part don't reveal their identity and remain anonymous, to be categorized by very basic premises such as rubber, steel, stone, textile, weight, mass, texture. I don't know whether it is the work by itself, or my own need for interpretation, but I am tempted with every gaze to search for meaning, subdivide and to trace the origins of these materials. The work invites me to this dance of hiding and seeking, while in the process a very physical, intuitive interaction is born.

Strolling between the work, it’s difficult to find a place to pause, as each material shapes and conditions the next. Despite the heavy nature of most of these materials, such as ceramics and plaster, there is a lightness that characterizes her work. A form of play that is very catching. Merely by their placement, these objects become suggestive, one can imagine various other setups in the given space, other materials could be added or subtracted, and ultimately the installation feels as if it has no beginning nor end. It is limitless. Independently of whatever material she chooses to work with, she manages to transform my sense of these materials and to invite me to a very intuitive and open research of things, where I have nothing to rely on but my own physical
senses.’

Galerie Fons Welters herewith invites you to Ruta Butkute’s solo exhibition in Playstation. The title of this exhibition Effort Graph is derived from Rudolf Laban’s method and language to describe the subtleties of human movement. For Butkute this specific graph directs both the shapes of her sculptures and video, as well as the visitor’s movement through the exhibition space, as described by Daniel de Roo.
Butkute graduated from Vilnius Art Academy (VDA) in 2007, where she studied traditional ceramic techniques. She then continued her studies at Gerrit Rietveld academie (2007-2010), developing her work towards sculptural installations. Ruta Butkute currently is a resident artist at the Rijksakademie.
www.fonswelters.nl