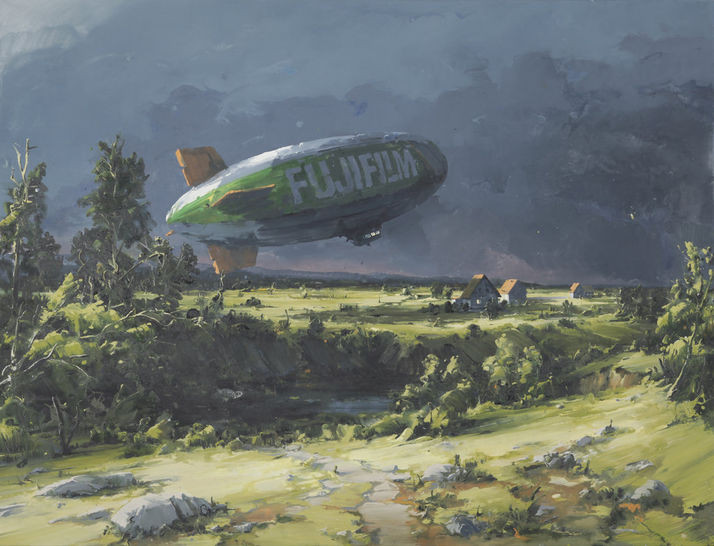 Galerie Fons Welters is proud to invite you to Sven Kroner’s exhibition "I'm just a dream". Kroner might be considered a classical landscape painter, whose landscapes of paint stem from personal experiences. In his most recent work, he literally looks at the outside world from within.

In 'Studio view, Lörick' (2014) we stare out the open window of Kroner’s studio. Over a flat landscape, our view is pulled directly to the high apartment building in the distance. Kroner seems to give the painterly veduta – a distant view painted from a window – a playful twist, or to refer to German Romantic painting in which the open window functioned as symbol for longing. But even more prominent than its view, he paints the window frame itself. Since the closed windowpanes are hazy, we are not quite able to focus. And thus the very interior, existing outside of the picture frame, seems to move forward.

The light painted by Kroner is clear and bright, its casted shadows so realistic, that in spite of its quick brush strokes, the painting seems to be true to life. However, doubt steps in. Where does the reflection of a house in the open window frame actually come from? Moreover, in the left corner a miniature house appears to stand inside on the window-sill, which suddenly turns the image into an indefinable moment between reality and vision. As Simone Lucas wrote in Kroner’s latest catalogue: "Sven transforms the banal into a real dream."

In addition to the series of window-paintings, Kroner shows panoramas in which ships have somehow collided with nature. Sometimes an impending sense of doom, of something being near at hand, dominates the image, then again we behold the calm after the storm. Empty barges lie, like ruins, in flooded meadows. A ship is stranded in a rocky forest, or elsewhere still hovering in the air; what exactly is going on here? It is this moment of uncertainty and tension that is characteristic of Kroner’s work. In stormy weather, a zeppelin flies low over a grassfield. “Fuji Film” prominently appears on the airship. As a provocative contrast, Kroner makes photographic realism fly away.