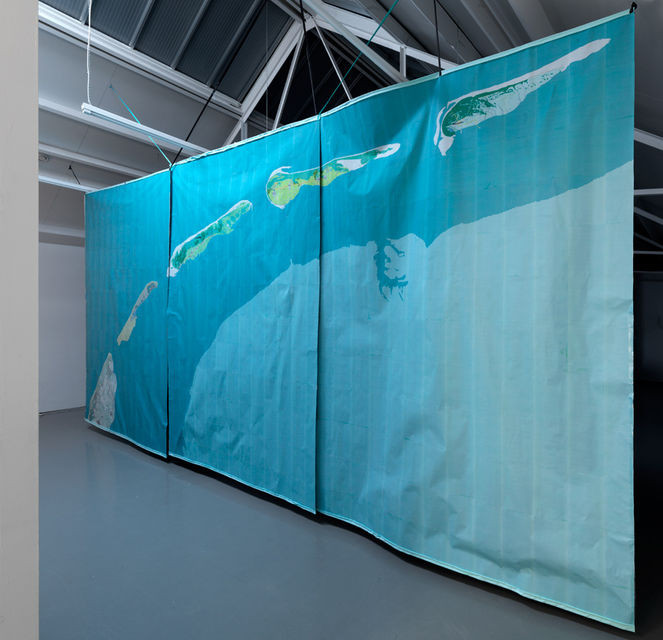 Galerie Fons Welters is proud to invite you to the first solo exhibition of Taocheng Wang, born from the artist’s recent fascination for the Dutch Wadden Islands. Since Wang first heard about their existence through stories of friends, mysterious and beautiful images of the islands shaped up in her mind. Wang wondered why only so few people she knew were visiting them, while they’re actually in such close vicinity. From late autumn 2014 to winter early 2015, she visited each of the Dutch Wadden Islands: from the most eastern island Schiermonnikoog to the most western island Texel.

Spending a couple of days on each island, she travelled around like a tourist would. She recorded her experiences and encounters on the island, filming the different habitation, vegetation, local architecture, museums and a bit of the tourist life. Wang’s travel report is however no ordinary account. Filming in winter time, the islands have lost some of their “promotional” qualities and are now partly grey deserted tourist hotspots, partly romantic windy beachscapes. But there’s more to these travel accounts. Like an eighties music video, Wang edits her experiences into a true travel music video. For her video on Schiermonnikoog, an old Taiwanese song is translated and sung by the artist in an eerily high pitched tone; while for Vlieland, a local pop song sets the tone of summery lightness. As Wang explores the islands with the curiosity or uninformed enthusiasm of a child, through a staccato subtitling, the songs offer an interpretation of the islands’ mood and perhaps also stereotypical imagery of the Dutch and/or Chinese tourist. Somehow it’s never quite clear whether she’s addressing certain stereotypes of the tourist, whether they’re Dutch or Chinese stereotypes, whether it’s a sincere interest she displays, or whether she mocks all of the above.

At dusk a boat arrives in the harbour of Schiermonnikoog, we see the shore lines lit by multiple flashes of light, the light house shining through the trees. The subtitles tell us:
‘I visited Schiermonnikoog this October, I arrived pretty late.
The island was named the “most beautiful place in the Netherlands by the Dutch populace on a large..” their official website says.
I only know little on its geography history or style of local architecture. ..
“mingled between Scandinavian style and Dutch style..”
I didn’t check any books or more internet references.
I just went there...’


Taocheng Wang (1981, Chengdu, China) lives and works in Amsterdam. She studied classic painting in China and continued her education at the Stadelschule in Frankfurt and De Ateliers (2012-2014) in Amsterdam, where she focused on video, film and performance. Her film ‘Forest, A Man, A Baby & Aristocratic Life’ co-commissioned by Stedelijk Museum and C.o.C.A. Foundation was recently exhibited at artspace Tale of a Tub in Rotterdam. As part of this commission 'Two Sights of the Elegant Mysterious Unearthly Princess Kaguya & Her Beggarly Nurtured Aristocratic Life Before She Flies Away With a Shining Ship' was performed at Stedelijk Museum Amsterdam. Furthermore, Wang’s work has been exhibited a.o. in ‘Up Close and Personal’ at De Hallen Haarlem (2014-2015); ‘Off Spring’, De Ateliers, Amsterdam (2014); Johan Berggren Gallery, Malmo; ‘I love you, Me either’, Project Native Informant, London, UK (2013); ‘Reading’, Leo Xu Projects, Shanghai, CN (2014); Living Room, Shanghai Goethe Institute, Shanghai, CN (2012) AMNUA Drawing Show Series, Art Museum of Nanjing University of the Arts, Nanjing, CN; How are you otherwise, Rongwrong, Amsterdam, NL (2013); Reactivation - The 9th Shanghai Biennale, Shanghai, CN (2012)
www.fonswelters.nl