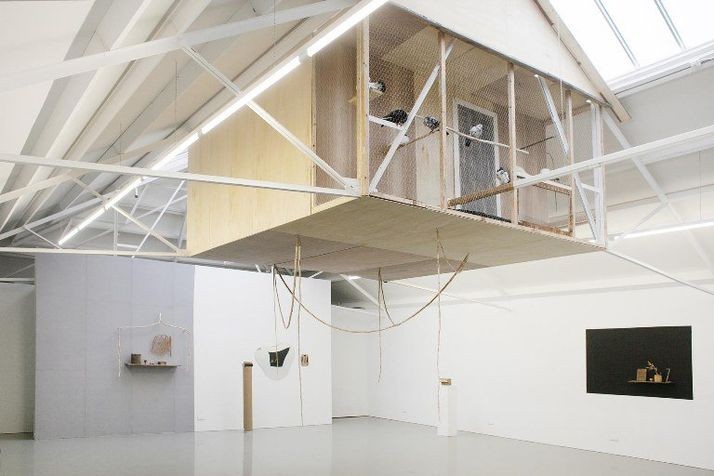 Zilvinas Landzbergas Artist PageDownload press release in EnglishDownload press release in Dutch
Individual letters seem to lead their own lives in the universe of Zilvinas Landzbergas. Like characters they are not just abstract, linguistic signs, but personas who figure in his visual narratives, with their personal form and suggestion of sounds. "Character R is the one I want to dedicate this storyline to. It's not special, it's just my favourite."
Landzbergas's installations – often made from simple and found materials – are like still lifes, each time centering a different storyline. For The Capital R, his second solo exhibition at the gallery, the Lithuanian artist brings these separate, but continuous storylines in the form of sculptural series together for the first time.
In these installations, the artist shows the physical strength of everyday objects, but simultaneously confuses these through small changes or optical illusion. Thus he points at a different layer of the recognizable world. This time, however, Landzbergas puts life itself in the middle of the gallery, where he placed a wooden dovecote on long legs, built on site by the artist himself. The construction extends to the roof of the gallery, reaching up to its windows. During the exhibition, white doves inhabit the bird house as a modest symbol of hope and luck, that might literally fly away at any given moment.
The dovecote is, among others, surrounded by small still lifes on the walls, compositions of traditionally crafted wooden objects: for example, a stump with an anthropomorphic character provides a stage for an hourglass, a number of polygonal dice and a bird. As long fingers, two wooden branches hang beside this mysterious miniature spectacle, in a protective or perhaps threatening manner.
While the exhibition’s title, The Capital R, explicitly refers to an uppercase letter, normally placed at the beginning of a sentence, Landzbergas’s works can’t be read from left to right. In this case it’s a capital indicating a name, of the character ‘R', that occasionally appears and possibly suggests a visual narrative connecting these different series.