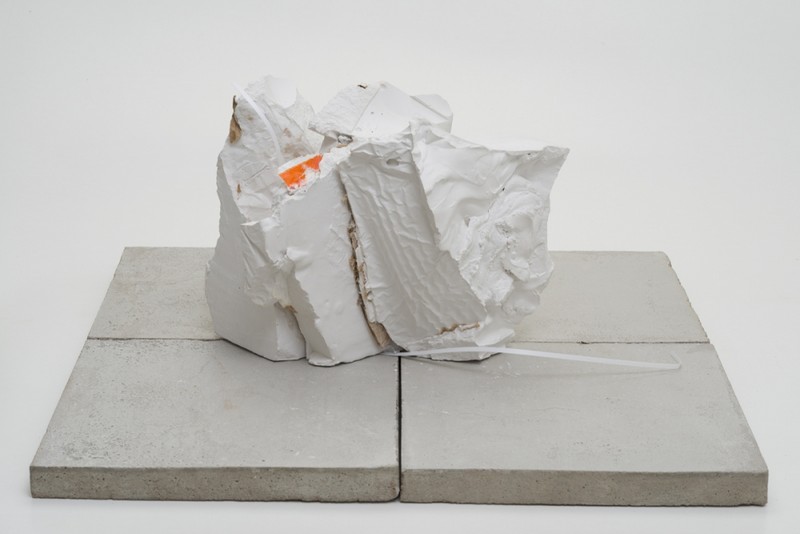 Tudela’s research is often focused on how cultural aspects from different origins and times clash in hybrid objects. In Metades XXL, large pieces of printed fabric (canvas and satin) are cutout and sewn in deconstructed forms that resembles oversized kushmas or tunics, evoking yet a precarious shelter. The print on the outside of the fabric display patterns created by rubbing pieces of plaster onto paper. The inner side, however, bears a typography developed on the basis of images of bodies. The words that are formed were taken from the glossary of Amazonian terms in the book Las Tres Mitades de Ino Moxo y otros Brujos de la Amazonía, written in 1981 by the Peruvian poet César Calvo.

In Rama, branches found in the streets are cast in bronze and mounted directly on the floor with a plastic bag at their end. The bags contain objects gathered by the artist, such as cell-phone manuals, door handles and seashells. The sculptures suggest small snapshots of contemporary nomadism, while denoting vestiges of something that is fleeting or in movement.

Nos transferimos is a group of sculptures made of plaster, copper and plastic that alludes to the online service for sending digital files, WeTransfer. The artist pours wet plaster into boxes that store old works, in a way that the plaster absorbs elements of the packaging – cardboard, packing foam, tape etc – while taking the shape of the previous works, in a process of sedimentation and transference.