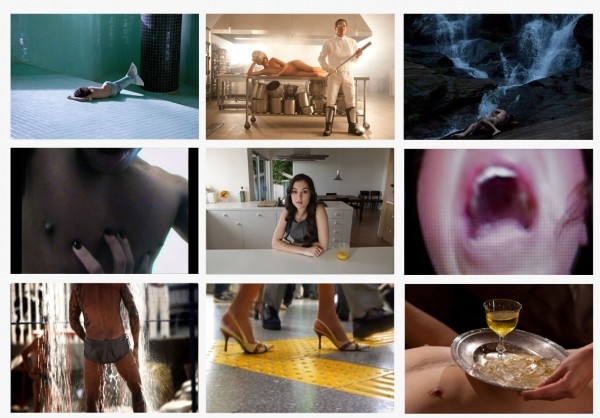 Galeria Fortes Vilaça is pleased to present destricted.br, an exhibition concerning sex, eroticism and pornography. This group show features never-before-shown artworks produced originally on the cinematographic production platform Destricted, which gave rise to it. For the first time, all the films created for the project will be shown side by side with related photos, sculptures and paintings. The participating artists are Adriana Varejão, Dora Longo Bahia, Karim Aïnouz, Janaina Tschäpe, Julião Sarmento, Lula Buarque de Hollanda, Marcos Chaves, Miguel Rio Branco and Tunga.

Destricted.br is the Brazilian version of Destricted – originally conceived by English curator Neville Wakefield with the artists Mathew Barney, Larry Clark, Richard Prince, and others. Produced in Brazil by Lula Buarque de Hollanda, Márcia Fortes and Alessandra d’Aloia, Destricted.br sprang from an invitation to the artists to create films of an (explicit or implicit) erotic nature. Based on this experience, or in parallel with it, they also produced other artworks, in other media, that are freely or directly related with the images we see in the films. The exhibition moreover includes older works by some artists where the sexual content appears in a latent form.

In Psinoe, Adriana Varejão constructs a dreamlike narrative about a sexual encounter between a mermaid and a man, with elements in the background from her own pictorial universe, such as ceramic tiles and the ocean bottom. In continuity with her work with photography, Varejão also produced images where the mermaid’s body appears within a tiled background. The work petit a, by Dora Longo Bahia, is a nonlinear story with three couples in completely different settings – a professor and his female student on a train, a cook and a beautiful young woman in a kitchen, and a female singer and a male fan at a rock show. Longo Bahia shows a series of more than 100 drawings and collages where the references are deconstructed as an exercise in the revision of the history of filmmaking, painting, and literature.

Karim Aïnouz constructs a wild and idyllic scenario, in a sequence between a middle-aged couple at a waterfall. For its part, Ponto de vista [Point of View], by Janaina Tschäpe, follows a scene of group sex where all of the images are made by a subjective camera mounted on a woman’s head. A series of abstract engravings freely inspired in the films also take part in the exhibition. In Leporello, Julião Sarmento creates a cacophony of verbal sex by overlaying four narratives told simultaneously by four women and presented in the format of a video installation. Amor [Love], by Lula Buarque de Hollanda, questions the meaning of violence and love in pornographic images stolen from Internet. The filmmaker also presents his films in the form of installations where the spectator is invited to lie down or kneel to watch the screenings. Marcos Chaves uses images stolen at beaches or in a gay sex club in Rio de Janeiro in Day and Nightshots (Oferta e Procura) [Day and Nightshots (Supply and Demand)], the title of both the film and a series of photos present in the exhibition. Fogu’s Subway Dream, by Miguel Rio Branco, is an abstract narrative of beautiful images of sex and the city of Tokyo. Finally, in Cooking, Tunga portrays a couple that takes sex to the outer limits. Surrounded by sculptures and crystals, their bodies mimic the works. One of the sculptures is part of the exhibition.

By showing sexual practices of various natures, destricted.br leverages the idea of risk in artistic creation. Due to its explicit nature, the exhibition is prohibited to viewers under 18 years old.
www.fortesvilaca.com.br