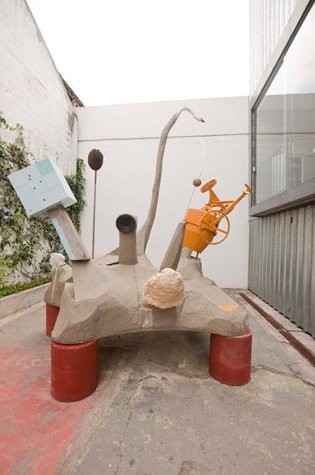 Galeria Fortes Vilaça is pleased to present Bicho de 7 Cabeças [7-Headed Beast]. The exhibition, in the Garden of the Galpão Fortes Vilaça, consists of a monumental sculpture by Erika Verzutti in collaboration with artists Adriana Varejão, Alexandre da Cunha, Carlos Bevilacqua & Ernesto Neto, Damián Ortega, Efrain Almeida, Jac Leirner and Nuno Ramos.
Bicho de 7 cabeças is in keeping with a modus operandi exercised by the artist, where a sculptural mass becomes a recipient for all the forms. Saramandaia, a bronze sculpture from 2006, is a vase that holds a bust, a hammer, a duck’s head, etc. In 2007, the artist made her first Bicho de 7 cabeças, with a deformed arm from which sprout bronze heads molded from pumpkins, star fruits, bananas,... The sculpture presented here unfolds this experimentalism in various layers.

For Bicho de 7 Cabeças, 2010, Verzutti invited artists with totally distinct practices to each elaborate one of the heads, with the only condition that they be resistant to the weather. Some of the heads naturally echo the respective artists’ individual practices. Others present surprising results. Alexandre da Cunha put a concrete mixer in the place of his head, while Adriana Varejão made a cube covered with tiles with eyes embedded in the surface. Efrain Almeida sculpted a swan’s head, and Jac Leirner appropriated a head from a garden sculpture. The proposed heads are also related with the sculpture’s collective, allegorical and conceptual character. Ernesto Neto and Carlos Bevilacqua, invited to conceive a single head together, proposed a white feather. Damián Ortega enlarged the collective nature of the monster, by proposing a malleable head, which the viewers themselves can manipulate. Last but not least, Nuno Ramos, suggested a talking head, which recites a text of his authorship.