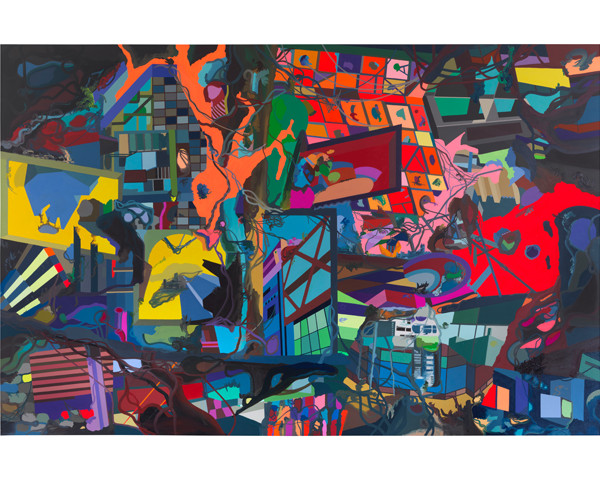 We are pleased to present the exhibition New Ads for São Paulo, by German artist Franz Ackermann. This is the first exhibition of a special program planned for 2011, when we are celebrating the gallery’s 10th anniversary. Ackermann is simultaneously occupying the gallery and the galpão with a painting project that includes all the traditional supports, extrapolating their conventional limits. The show features canvas and mural paintings, drawings, photographs, prints and objects. To prepare the exhibition – the result of countless trips by Ackermann to the city – the artist proposed for himself an immersive experience: to live for two months in São Paulo and in the final phase of the setup bring his entire studio, with the help of eight assistants.

The artist has divided the exhibition into two key conceptual axes. The first, which occupies the gallery, is guided by the idea of landscape, nature, silence, and open-air painting. All the walls of the gallery are painted in hues of pink and brown in a sort of oversized pattern of forest tree trunks. On top of this mural painting, a series of framed drawings form a narrative line that explores compositions based on these natural forms.

The second axis, concerned with urbanism and noise, is presented in the Galpão. Ackermann proposed a new configuration for the Galpão’s walls, conceiving two distinct spaces. In the first of them, the visitor comes across a large three-dimensional work where pencil drawings of concentric lines are repeated on a painting on wood which, in turn, is on a painting made directly on a wall. This juxtaposition of images and media provides the exhibition’s overall tone. On both sides of this long, L-shaped wall, black-and-white large-format photographs of São Paulo are presented interspersed with oil paintings. Organized like a large chessboard, the photos show urban views and architectural details such as façades, windows and sidewalls in downtown São Paulo. This is the first time that the artist has revealed his perspective on the city without the mediation of painting. The photos were made by artist with a small digital camera and later remade in large format by photographer Eduardo Ortega. In the second space, the lobby, a large geometric mural painting features prominently, at its center, a black-and-white photo of a man with his back turned toward the camera, with a large airline luggage label in his pocket bearing the letters GRU (the abbreviation for Guarulhos, São Paulo’s international airport).