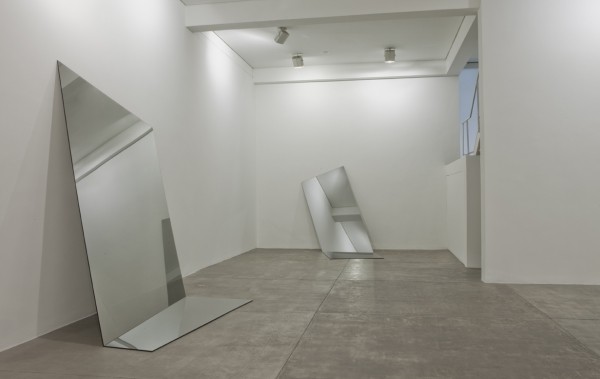 Galeria Fortes Vilaça is pleased to present this newest exhibition by Iran do Espírito Santo. The show features never-before-shown sculptures and a mural painting, which are further steps in the artist’s continuous investigation into light and folding, and their unfoldings in the conceptual realm.

In the two sculptures entitled Espelhos Dobrados [Folded Mirrors], rectangular mirrors are cut obliquely and then leaned against the wall, giving the impression that they are a single folded object. The mirrored surfaces are slightly transparent, giving rise to a situation that decomposes the surrounding space. These sculptures actively influence the perception of the environment, since they also apprehend observer’s the movement and gaze.

In Canto Escuro [Dark Corner] the diagonal persists, but is totally constructed with right angles. In this mural painting, the gradation of gray – previously constructed only in the horizontal or in the vertical – begins at the corner and continues outward along the walls. Equal-sized squares, like pixels, are perfectly aligned to form the image of the dark corner. The work – hand painted on the wall, with only the help of straight edges and tape – suggests a passage of light, or movement, also underscoring the ephemeral character intrinsic to mural painting as an artistic practice.

The sculptures entitled Globos [Globes], arranged on a bench at the back of the room on the first floor, are in keeping with a group of sculptures dedicated to light-emitting sources that date from the 1990s onward: candles, candlesticks, lamps, light fixtures, light bulbs and light posts are previous examples. The original shape of various light globes has been slightly reshaped in such a way that the final sculpture of solid white marble approximates a pure, ideal form.

Iran do Espírito Santo participated in the 48th and 52nd Venice Biennales, the 19th São Paulo Bienal, and the 5th Bienal do Mercosul. A retrospective of his work was held in 2006/2007 at MAXXI, Museo Nazionale delle Arti del XXI Secolo, Rome; at the Irish Museum of Modern Art, Dublin; and at the Estação Pinacoteca, São Paulo. His works figure in the collections of MoMA, New York; the Museum of Contemporary Art, San Diego; and MAXXI, Rome.
www.fortesvilaca.com.br