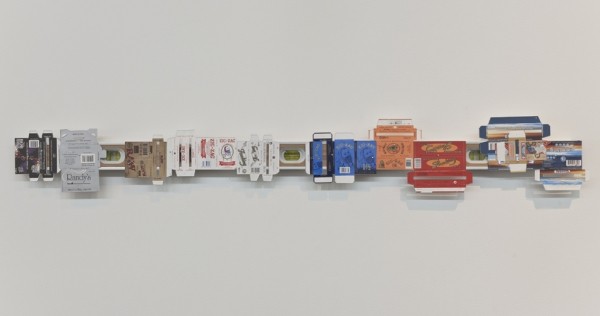 Hardware Seda - Hardware Silk, title which alludes to the material used in the works featured in the show by Jac Leirne, - such as precision levels, steel cables, hardware and cigarette rolling papers (in Portuguese, cigarette rolling papers are called papeis de seda, literally "silk papers") - is an exhibition composed of about twelve works. The artist developed these pieces during her artist's residency in March and April this year at Yale University, where she will still be giving classes in September. The conceptual practice of accumulating objects from day-to-day life, regrouping them with formal rigor and thus inverting their initial values, is a constant in the artist's works.

In Retrato [Portrait] postcards acquired over the decades or photos stolen from movie houses in the 1970s and '80s, of icons like Bruce Nauman, Shoemberg, Giacometti and Cocteau, are laminated and grouped with chains and hardware, in an inversion where the masters who have influenced the artist begin to explicitly constitute her work. In Hardware Seda - Hardware Silk, rings, plastic and metal tubes, hardware nuts, extenders, steel cables and even a key are linked to each other in a line of steel extending across the gallery space. What is normally used as a structure or instrument to set up an art exhibition becomes the work of art itself, the artist once again works inverting values. In Skin (Zig Zag 1 1/2 Ultra Thin) cigarette rolling papers are displayed on the wall one next to each other forming a large rectangle like a minimalist painting charge of meaning through the repetition of a single sign. In Jac Leirner's works, the objects are freely mapped with special attention to the transition from political to the personal record, from the daily life to the historical.

Jac Leirner was born in São Paulo, 1961, where she lives and works. She graduated in visual arts from Fundação Armando Álvares Penteado - FAAP. In 1991, she participated in an artist's residency at Walker Art Center, in Minneapolis, USA. That same year, in England, she was an invited professor at the University of Oxford and participated as a resident artist at the Museum of Modern Art of the same city. She participated in the 1983 and 1989 editions of the Bienal de São Paulo. She took part in Aperto 90 at the 1990 Venice Biennale, and also in the 1997 Venice Biennale, representing Brazil. She participated in the 9th Kassel Documenta, in 1992. Her work is part of collections such as Tate Modern Gallery, London, UL; the Museum of Modern Art and Guggenheim Museum, New York, USA; the Museu de Arte Moderna de São Paulo; Walker Art Center, Minneapolis, USA, and others. In 2011, she had a solo show at the Estação Pinacoteca do Estado de São Paulo, winning the prize conferred by the APCA (Associação Paulista de Críticos de Arte) for best exhibition of the year.
www.fortesvilaca.com.br