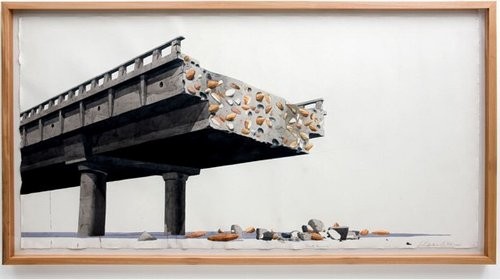 The Cuban artist duo Los Carpinteros, consisting of Marco Castillo and Dagoberto Rodriguez, is holding the exhibition Sub-Urbano [Sub-Urban] at Galpão Fortes Vilaça. Two large sculptures and a series of drawings, shown here for the first time, convey the artists’ hallmark: creativity and consummate skill in reinventing a wide range of everyday objects.
In the drawings as well as in the three-dimensional objects, household objects such as beds, barbecue grills, mirrors and sound systems have their original forms altered and their meanings and functions subverted.
The collaborative work of Los Carpinteros begins with the drawings made in watercolor. Used as a means of communication between the two artists, the drawings maintain the duo’s connection with manual artistic practice, and are sometimes transformed into sculptures and installations. This is the case of the artworks Dos Camas [Two Beds] and Alto Parlante Solimar [Solimar Loudspeaker], designed in 2007 and constructed for the exhibition.
Dos Camas evokes the most intimate human refuge within the home: two wooden beds are intermixed with mattresses to allude to actions such as sleeping, dreaming and having sex. One of the beds is life-size, while the other is long, able to span over the first. Thus, neither of them can be used in the traditional way. In Alto Parlante Solimar, a structure on a nearly architectural scale presents a complex interplay of loudspeakers which, however, do not produce any sound. Los Carpinteros blend reality with imagination, directing the spectator’s gaze to the everyday elements that would otherwise rarely call his/her attention.
Los Carpinteros are the most well-known contemporary Cuban artists. Their artworks are featured in collections such those of the Solomon R. Guggenheim Museum, New York, the Museum of Contemporary Art, Los Angeles, and Tate Modern, London. They have participated at prestigious art events including the 51st Venice Bienale, the 25th Bienal de São Paulo, and the 4th Bienal do Mercosul. They are currently participating at the exhibition Psycho Buildings at Hayward Gallery in London. The duo’s next project is a site-specific installation at the Indianapolis Museum of Art, also in 2008.
www.fortesvilaca.com.br