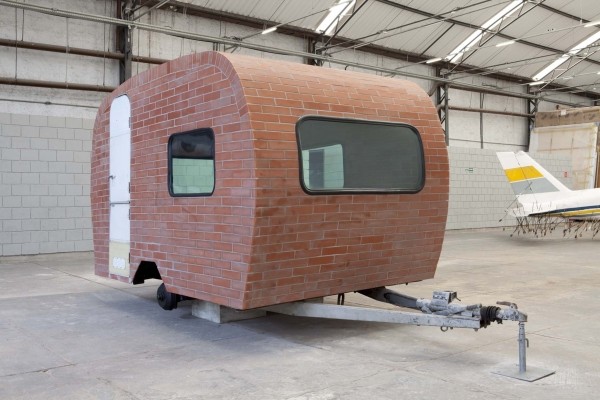 We are pleased to present the new exhibition by the Cuban artists Los Carpinteros. Marco Castillo and Dagoberto Rodriguez transform objects, furniture and architectural structures, using their functionality - or dysfunctionality - as a means of expression. In this show, two large-scale sculptures with distinct and contrary elements propose an unusual narrative.

A common travel trailer, but made of bricks and cement, inverts the idea of mobility and leisure usually associated with this means of transport. Parked in the exhibition space, the house-trailer sculpture has the solidity of a monument, which questions our relationship with the familiar. The contrast between the built structure and the "mobile" object; between the desire to stay in one place and to leave pervades this work of contradictions. It is situated between the impromptu - and perhaps desperate - act of creating a dwelling and the millimetric planning of construction that the object requires.

A single-engine airplane, bristling with indigenous arrows, forms a curious image that prods the viewer to imagine what may have brought about the "interruption" of this flight. Why was this airplane flying over an indigenous area? And why was it attacked? If it was attacked in the air, why wasn't it destroyed? These questionings of a symbolic nature make the viewer confront his/her own repertoire of stereotypes about the wilderness, the Indians, and ultimately any sort of "other" - as is frequently present in the media, in films and on TV. They are narratives that play with the perception of everyday life; from the local to the universal.

Five large-format watercolors are shown in a separate space of the Galpão. In an indirect dialogue with the sculptures, they deal with the theme of parking lots, Lego structures, and structures of architectural interiors whose original forms appear altered and twisted.

Los Carpinteros are the most recognized Cuban contemporary artists. Their works figure in collections such as that of the Solomon R. Guggenheim Museum, New York; the Museum of Contemporary Art, Los Angeles; and Tate Modern, London. They have participated in various major collective events, including the 51st Venice Biennale, the 25th Bienal de São Paulo, and the 4th Bienal do Mercosul. In 2010 they published the book Los Carpinteros Handwork - Constructing the World through Thyssen-Bornemisza Art Contemporary, and next October they are opening a large exhibition featuring works from the same collection in Palma, Spain.
www.fortesvilaca.com.br