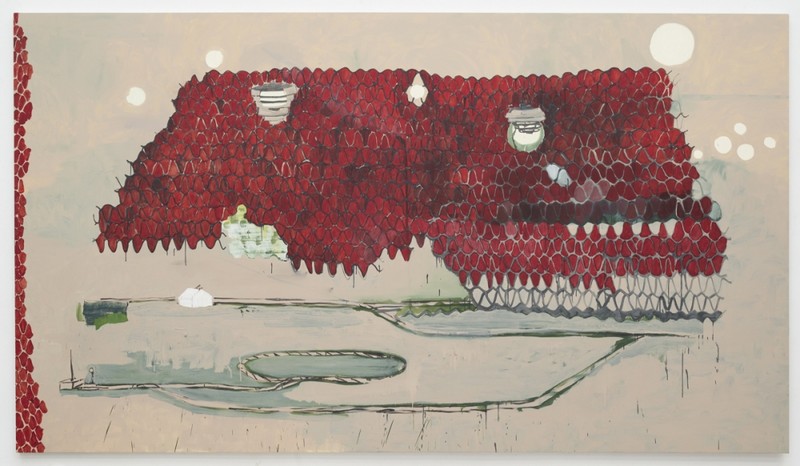 We are pleased to present Uma hora e mais outra [One hour and yet another], a solo show by Marina Rheingantz at Galpão Fortes Vilaça. The show features 15 oil paintings, where the artist blends antagonistic elements, which can be images, styles or colors. In this new body of work places of passage, desolate landscapes and sublimated memory emerge like the components of a collage.

Marina has taken the exhibition’s title from a poem by Carlos Drummond de Andrade. More than a reference or inspiration for her production, the title points to the artist’s process of creation. Based on photographs or her own memory, these canvases are constructed and deconstructed layer by layer, one hour after another in her work in the studio.

The artist continues to explore fragmented images and haunting landscapes, as in Fisherman, in which a seemingly deserted village is portrayed from a distance in green and orange tones, or in Crossroads, where a bluish-gray draft of a road network covers the landscape painted below. The show also includes works where by the process of erasing the artist reaches abstraction. In the canvases Chuvisco andChuvisco II it is no longer possible to identify any element that recalls a landscape or object; the layers of paint are overlaid forming large fields of color, retaining only the memory of the real.

The interplay with abstraction is also seen in Romã [Pomegranate], the largest work in the exhibition, which shows an abstract red pattern suspended in the center of the canvas, floating over a rural landscape that also contains sketched depictions of light fixtures. This canvas reveals the artist’s desire for experimentation, bringing together dissimilar elements, unusual overlayings, interior and exterior scenes in bold compositions.

Marina Rheingantz was born in Araraquara, São Paulo, in 1983. She received her degree in visual arts from FAAP in 2007. She was a founding member of a group of São Paulo young painters, 2000e8, whose entrance to the professional circuit was intensely covered by the specialized media. Her solo shows have notably included one at the Centro Cultural São Paulo (2012) and another at the Centro Universitário Maria Antônia (2011). She has participated in various group shows including, recently, Lugar Nenhum, Instituto Moreira Salles, Rio de Janeiro (2013); Os dez primeiros anos, Instituto Tomie Ohtake, São Paulo (2012); and the 6th Bienal de Curitiba (2011). Her work figures in important collections such as the Pinacoteca do Estado de São Paulo and Instituto Cultural Itaú.
www.fortesvilaca.com.br