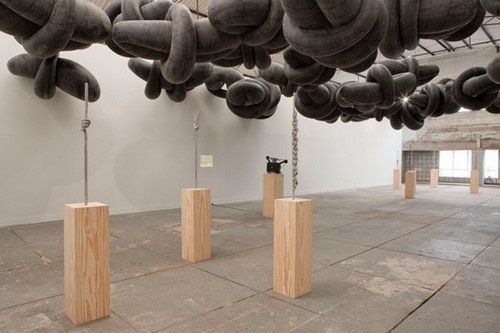 Fortes Vilaça is starting off its 2010 schedule of exhibitions with the first solo show by German artist Michael Sailstorfer in Brazil. In Knoten Wie Wolken [Knots Like Clouds] the young artist presents a large installation made up of dozens of tire inner tubes, a series of aluminum sculptures in the form of knots, and a 16-mm film.

In Knots Like Clouds, Sailstorfer uses dozens of large black inner tubes intertwined in knots and suspended at different levels like “black clouds.” In this work, developed especially for the Galpão’s space, Sailstorfer has gone back to using the industrial materials characteristic of his oeuvre. But if in daily life these tires would be in constant movement and undergoing continuous wear, here they have taken to the air, in a state of permanent suspension.

The opposition between movement and inertia also pervades the group of sculptures present at this show. The artist has based these artworks on different knots tied in thick ropes. Through the use of molds, he has substituted the material – the ropes – that gave rise to the form. The knot, an essentially malleable object, gains rigidity as aluminum sculpture. With no possibility of ever being untied, these knots are now closed sculptural forms, giving fixed embodiment to an idea.

For its part, the film shows a warehouse whose walls are continuously expanding and contracting, as though we were watching the entire building breathe. Sailstorfer filmed the explosion of this warehouse at high speed, a technique that results in a slow-motion effect when we watch the film projected at normal speed. He then removed the parts of the film in which we would see the building explode, and edited the movements of expansion and contraction to create a repetitive sequence. While the simplicity of the architectural forms evinces a sculptural thinking behind the camera, the temporal relations of movement and suspension also establish a productive dialogue with the other artworks in the exhibition.

In 2009, Michael Sailstorfer held a solo show at PS1 MoMA, New York. He has participated in countless important international group exhibitions such as The Quick and the Dead, at Walker Art Center, Minneapolis, in 2009; Made in Germany, at Kestnergesellschaft, the Kunstverein Hannover, and Sprengel Museum Hannover, in 2007; Still Life: Art, Ecology and the Politics of Change, the Sharjah Biennial; the Moscow Biennial in 2007; the Yokohama Triennial, in 2005; and the Liverpool Biennial in 2004. In Brazil, Sailstorfer participated in Galpão Fortes Vilaça’s inaugural group show God Is Design, in 2007.
www.fortesvilaca.com.br