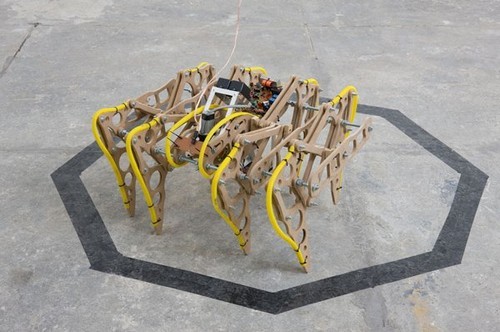 Fortes Vilaça is pleased to present Aranhas [Spiders], Paulo Nenflídio's second solo show in São Paulo. In this exhibition, consisting of an installation entitled Teia [Web] in the form of a spider's web along with three spider-shaped sculptures, the artist presents kinetic works, for the first time, exploring visual effects based on physical movements.

Hanging from the walls at a height of 1.7 m, Teia is a large, open and irregular structure that seems to hover in the air. Composed of stretched and overlain electrical wires and nylon line, this artwork also looks like veins or neural connections. In this work Nenflídio has maintained his characteristic use of sound: he has equipped the web with a device able to sense the viewer’s proximity, activating the emission of different kinds of harmonic and high-pitched sounds, at the threshold of audibility. This results in a jumble of sounds resembling the noise of a fax machine or Internet dial-up connection.

The Aranhas are right nearby. These sculptures are intended to avoid any static condition, remaining in constant movement. They are open artworks that are reinvented at each moment, like the works by Dutch artist Theo Jansen, a key reference for Nenflídio.

The sculptures are low-tech, made of fiberboard, electrical components, conduit or PVC pipes, motors, power sources, sensors and black electrical tape. They are able to walk about or climb the wall for up to thirty seconds in a predefined space. Sensors situated in their “eyes” detect the presence of the spectator and set the spiders’ legs into movement. Wires that connect the spiders to small power sources act as ramifications of the Teia, interconnecting the various pieces of the set.

For Nenflídio, “the artworks are related more with cybernetics than with kinetics, as they are automatons that create automatic music, as all the pieces together form a sonorous composition.” The set effectively realizes a central aim of this artist: the interaction/participation of the public with the work of art.

In 2007, Paulo Nenflídio participated in the show Panorama, no MAM – Museu de Arte Moderna de São Paulo; in 2006 he took part in the exhibition Geração da Virada [The Turning-Point Generation] at the Instituto Tomie Ohtake. He received an award from the fifth edition of the Sérgio Motta Prize in Art and Technology, in 2005, and was conferred the Pampulha Grant in 2004.
www.fortesvilaca.com.br