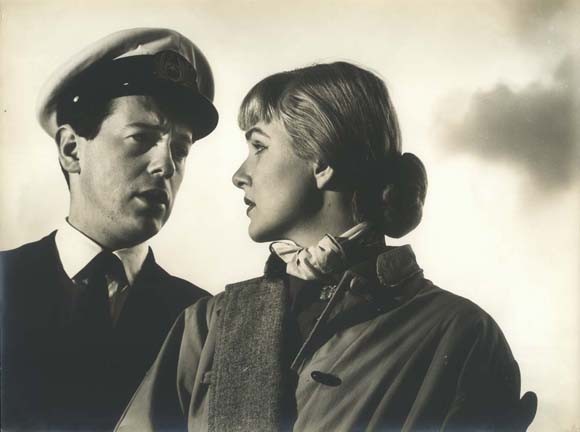 A blonde woman and a dark-haired man drive in a convertible along the coast — a clichéd scene straight out of the classic Hollywood film. With a large-format camera and artful lighting George Friedman photographically staged the high society lifestyle in single narrative episodes combined in photo stories. In masterful arrangements and compositions as well as with a compact staging technique he depicts the emotional, dramatic imagery of big Hollywood movies with cool erotic and elegant gestures. Friedman became a master of still photography reminiscent of film when he worked as a cameraman for Pathé, Paramount, and MGM film studios before he found a new home in Argentina in 1939. In the early 1940s the film-inspired genre of the fotonovela took root in a financially weak South American market.

György Friedmann, born 1910 in Hungary, soon ranked as a master of his craft in Argentina, while until just a decade ago his name was known in this country to only a handful of specialists. Gallerist Norbert Bunge presented the photographer’s work in 2003 at argus fotokunst, his gallery on Marienstraße in Berlin, to the German and thus also the European public shortly after Friedman’s death in 2002. Bunge was made aware of Friedman by the German photographer Max Jacoby, a pupil and later friend of George Friedman. Jacoby and Friedman met in the late 1930s in Argentina and belonged to the Carpeta de los Diez (Group of Ten) founded in Buenos Aires in the 1950s, a group of mostly emigrant photographers who were a strong aesthetic influence on the photography of Argentina.

Friedman ranks next to László Moholy-Nagy, André Kertész, Eva Besnyö, Martin Munkácsi, and Robert Capa (who allegedly renamed himself because they shared the same last name—he was originally called André Friedmann) as one of the great Hungarian photographers, who all share a biography of exodus and emigration. As a 17-year-old Friedman emigrated to Paris, and in the following years he photographed portraits of celebrities for Manuel Frères’s studios and published work in the film magazines Pour Vous and L'Intrangsigéant. His travel and reportage work appeared in such magazines as Vu, Paris Match, Time, and Life.

In his photographic work Friedman was interested, on the one hand, in people’s daily lives and took pictures of Argentinian gauchos and miners in the candid photography style of that time, as was demonstrated in Edward Steichen’s 1955 exhibition “The Family of Man” to the international public. On the other hand was an interest in elaborate and perfectly staged photography, which reveals clear traces of his film studio experience. With the acquisition of the photo-story magazine Idilio in 1971, in which he published his fotonovelas, Friedman became the style innovator of photography in Argentina.

The fotonovela, similar to a comic book, depicts a classic photo story with accompanying text or speech bubbles. Originally produced in Italy and Spain, the fotonovela found a rapid spread in the ’40s in South America thanks to the worldwide breakthrough of cinema—the aesthetic vocabulary of which is picked up in the novelas—and in the course of its own successful history as a mass medium also became an independent artistic innovation separate from film production. Here, three main trends can be identified: In the novela rosa it is all about love, marriage, and family; the novela suave explores the life of the middle class; and finally the novela verde represents the pornographic variant of the genre. The photo stories by George Friedman, which show the life of the “high society” as an ideal or fantasy to the viewer or reader of Idilio, can be classified as novelas rosas. His personal approach is less the playfully romantic kind, and is much more influenced by the cool, elegant atmosphere and drama of film noir.

The Forum für Fotografie presents individual images that do not spring directly from his photo story production but represent Friedman's artistic reflection on a pop medium that he mastered perfectly, the visual one-dimensionality of which he sought to overcome in discrete photo productions. Divested of narrative context, stand-alone photographs gain their particular impact through a newly acquired multi-dimensionality. The particular striking momentum beyond mise-en-scène must now be filled in contentwise by the viewer. The aesthetic profit is due to a complexity that is still effective and appealing to us, and to an intensity of the visual drama, as well as to an increased compression of psychological moments like alienation, emptiness, desire, and the fleeting nature of human happiness.