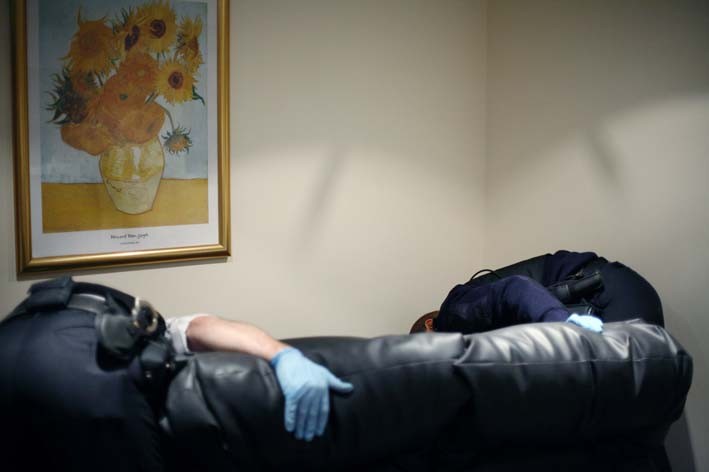 There is an ethically troubled but seductive borderland, somewhere between poetry and documentation, and its name is Hackney. Nothing is quite what it seems in this place, contradictory memories of the same events haunt a borough now determined, if those in authority get their way, to obliterate the structures and mythologies of a difficult but fondly remembered past.

Times have never been quite so challenging or quite so hot for writers and image-makers. Any attempt to map or register cultural difference has to be undertaken in direct competition with the evidence-gathering machinery of the state. Control-freak apparatchiks, the ones who want to turn the world into a movie but who won't let unapproved citizens pick up a camera, have raised the stakes: absolutely. Crime is defined as time-coded footage that has to be replayed, numerous times, for its meaning to be understood. If the image-stream of surveillance flows on, without intervention, nothing significant is happening. All we can register is that the computer-generated paradise offered on easy terms, the shimmering river, the people's park, the pristine development opportunity, is a lie. The more you see it, the less there is to know. Those dawn raids, the climate-camp demonstrations in the City, are about the construction of a parallel history, photographs that can be edited to fix a convenient fiction. The real battle is between the sponsored digital technology of the state and the mobile-phone improvisations of protesters caught up in the action.

While Robin Maddock was accompanying police from Stoke Newington on their raids into what they understood as alien (if not enemy) territory, Hackney councillors decided that the best tactic for combating litter abuse was to establish a snoop squad, undercover agents stalking the borough with cameras. ‘In one incident,’ the Evening Standard reported, ‘two enforcement officers burst into a café in Mare Street, searching for a woman who had dropped a cigarette butt on the ground outside’. The raids, recorded by Maddock, are a more dangerous version of the same strategy.

Walking the local streets, early in the morning, I frequently witness preparations for the sort of incidents Maddock documents with such an innocent eye. (I don't mean that he is uninformed or naïve. His method is non-judgemental, playful, fair to both sides of the dispute.) The slow procedural hours, in the aftermath of the smashed door, inspire a catalogue of small revelations. The drugs themselves, at the centre of all this fuss, are ‘glamorous in their absence’. There seems to be an agreement between cops and postcode gangs (aka ‘negative youth affiliations’) to avoid collision, the raiders mass at first light and the youths manifest at dusk on the same estates. Screaming sirens work like a courtesy call, allowing offenders to melt into the shadows before they become tedious paperwork.

The underlying narrative of Maddock's book is an astringent tribute to place: as it is, not how it should be. Triffid blocks, neurotic with electricity, in an ocean of bare branches and bruised light. Hooded spectres as dreams or nightmares of the buildings themselves. The police, with their passed vests and short-sleeved white shirts, spread out to advance on the dark place, a city within the city. The poetry of distance is nicely managed: the photographer's attitude is alert, collaborative but not forensic. He brings a measure of humane record to a brutal process. Once inside Mexican ironies are noted: surrealism on the cusp of farce, the pinned-up card or the accidental TV frame that acts as a parallel text. Here is the bent head of an old man, as unknowable and intent as Samuel Beckett, sitting on a toilet alongside the life-size transfer of a laughing skeleton. Here is the policeman with the throwaway yellow camera gripped so fastidiously in purple rubber gloves.

It is a real achievement, to give weight to accidental elements at the edge of the official story: those who look at buildings from outside and those who watch and wait at shrouded windows. Maddock speaks of wanting to locate spirit in a material universe by recording ‘solid atmosphere’. Resolving his ambiguous status, as privileged witness, he succeeds. The pictures stand on their own, in their peculiarity, and as part of the still unravelling history of a special part of London.

Introduction by Iain Sinclair in Robin Maddock: Our kids are going to hell, London: Trolleybooks 2009


OUR KIDS ARE GOING TO HELL


We do not remember for long the what of events unless it is accompanied by the how and the why in understandable human terms. To give us this, the journalist must also become an artist, bringing his understanding of life, his sensitivity and, above all, his own participation in what he is experiencing to a high point of focus, sharpening its essential reality. 1
For three years between 2005 and 2008, Robin Maddock accompanied the police task force by special permit during their night raids in Stoke Newington in the suburb of Hackney, North East London. Out of this privilege of full access to operational activities, Maddock did not however let himself be seduced into shooting superficially spectacular images of violence or dramatic events. The cutting open and entering of apartment doors in the early morning hours appears a routine, orderly process. No blood is spilled, we see no fleeing criminals, we are spared surprise attacks and beatings. The suspects are mostly sitting, with handcuffs on, on sofas or beds when they are photographed by Maddock, with resigned or distant-looking miens as they endure the house searches around them. The realism with which the detainees are brought into view, the collision of their intimate sphere with the invasive state authority automatically brings to mind the work of Weegee, especially his famous nighttime photographs in 1940s New York of arrests of criminals large and small.

The link is revealing in two ways: It marks firstly the completely new quality of Maddock’s approach, to undermine the drama of the event and to filter out all physical violence. Weegee preferred to catch the offenders, who are exactly identified in the photo’s title, in such a way that the crime seems to be reflected immediately in the facial expressions seized by the close up camera lens, and the drama, when possible, could be further increased by the curious gazes of rubberneckers. Yet Weegee’s photographic work offers an artistic dimension as well, beyond the voyeurism interested in the physical manifestation of the offense, as Alain Bergala describes, “Weegee’s ‘touch’ is very largely characterized by his determination to resist the elementary rules of press photos (the correct angle, maximum legibility) in order to frame on the contrary the scenes proposed to him by life’s violence, as a director might frame a film shot: in such a way as to leave room for mystery, for speculation. To draw in fiction that will fill in information that is incomplete or imperfect, too partial or too large.”2 It is those strategies of ambiguity, of an irony purposely placed in the image and an absurd humor, with which the one-dimensionality of the action is betrayed with a wink, that also particularly characterize Maddock’s very personal photographic style.

If one has the impression, on the one hand, that the overpowered and helpless suspects are treated with respect and empathy by Maddock from a discrete, dignity-respecting distance (often they are anonymized by being cropped by the picture framing or photographed from behind), one cannot quell the suspicion, on the other hand, that the documented efforts of the forces are accompanied by a certain smirk: the officials climbing on kitchen cupboards, rummaging under sofas and beds for drugs or weapons, and making incriminating snapshots with cheap disposable cameras, give eloquent testimony to the banality and futility of the mostly useless police procedures. The graffitied figure with a mocking smile turned in the opposite direction, included as if by chance in the photograph, seems to comment on the gathered police officers taking a boisterous breather in front of a courtyard wall. On a poster on a door turned into view the rapper Tupac Shakur, a pistol in his waistband, aggressively gives the security forces the middle finger. A police helmet placed on a table becomes an unwilling component of a bizarre still life of paraphernalia of nonstop drug use. Scenes with TVs running turn into further visual asides and add a note of unreality and equivocality.

Maddock’s eye goes repeatedly past the actual events to the courtyards and the surrounding façades, and in the process catches curious onlookers at windows and doors or on the road, but whose reactions seem equally distant and skeptical. The general climate of indifference and paralysis is increased in its sadness by exterior shots of a rather inhospitable Hackney marked by high-rise complexes, deserted side streets and backyards. Photographed under existing lighting conditions, the often shadowy and stony-seeming groups of figures give the overall picture of reticence an additional quality of alienation.

The resulting overall image is thus marked by disparity and isolation. Here, no conclusions are drawn and no cases are cleared. The viewer of this kaleidoscope of incongruent fragments of events falling subtly into each other can make no real rhyme or reason: The issue of content raised by Bergala implodes, the speculative space opens for the underlying mood of the barely coherent story, which takes over the function of the actual message.

While we find out very little about identifiable sequences of events, our sensitivity focuses increasingly on the generally uneventful-seeming atmosphere, the character of the story — an aesthetic effect emphasized by the mix of hectic crowds, chaos, and the mute helplessness of the individual on the one hand, and on the other, the panorama shots of Hackney at night, like melancholy experiments of contemplation.

Thus Maddock abandons the easy, but irrelevant payoff of sequential readability and turns his back on it, “This is not the aim of this project, but rather to show the condition of lost meaning and toxic poverty of spirit. [...] The main suspect here is the landscape, the contrasts in Hackney’s built fabric speaks for all of our collective disregard.”3 In the systematic refusal of all rhetorical registers Maddock lets the subtle choreography of conflicting individual images speak for themselves, and thus any forms of one-way interpretation of social and political circumstances are deprived of legitimacy. And so emerges a density of the atmosphere recorded by the artist from the supposed formlessness of an open-ended documentary.