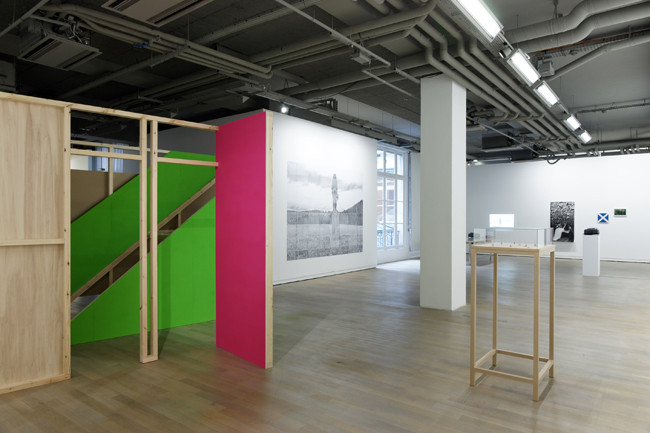 Susan Hiller, "Day for night", 2009.
If an exhibition consists in putting a history and a reading of forms into perspective, if the point of view from abroad on what is foreign is necessarily uncertain, it also produces as a consequence a play of mobile points of view. In this sense, Au loin, une île ! is an exhibition on the British art scene, even as this scene cannot exist in and for itself but may instead be an object of description, analysis, and fantasy. The island here is the prism or the transparency through which we looked at current creation in an art scene rich in contradictions, defined both by its cultural diversity and its geographic and political insularity: a symbol of openness and mastery.

The space implied by the very idea of an island is ideological and visual. A motif capable of setting up a dialectic without opposing, of renewing a British political and cultural heritage and turning it into an object of emotion, the island is a geographic reality as well as an allegory, a position and an imaginary. A Romantic motif, it is exoticism, otherness, margin, exile. Between the island and the question of art, the link is ideological, as time and again creation appears so manifestly insular. The works exhibited at the Frac Aquitaine from September 30 to December 17, in what was the first installment of the exhibition, thus belonged in an imaginary in which the island as object of poetic and geographic interpretation was on display historically and thematically in a selection running from the 1970s to the present day. In these works, the island was the text to be read or even invented, becoming at once the time of isolation, of the instant, and of the gesture, the ultimate, the aim, the very violence of despondency. It appeared as a territory for existential definition, both symbolic and real, and eminently political.

The migratory movement of the exhibition, from Bordeaux to Paris, from the Frac Aquitaine to the Fondation d’entreprise Ricard, follows from the very movement of displacement which produces the island when it is considered as an interval, a movement, a gap, a difference, and at the same time as a totality. Gail Pickering’s installation Brutalist Premolition, presented in France for the first time, may in that regard cristallize the interstice proper to the movement producing the island, when the identity of the project (and that of the protagonist of the story) is both shared and complemented by the displacement. Marc Camille Chaimowicz’s work Prie-Dieu, which is part of a new series of works inspired by the emblematic figure of Jean Genet, also materializes the sometimes contradictory links between a withdrawal into oneself and a ceaseless quest for freedom. The movement traced by the displacement is insular, occurring as a tipping over, a leap, and a reversal. The exhibition featured at the Fondation d’entreprise Ricard from January 9 to February 11, 2012 is therefore both a closure and an extension: it presents the opportunity of rewriting this text which remained to be invented, and in it the island, more than ever, becomes a hypothesis, a passage, a place to explore.
www.fondation-entreprise-ricard.com