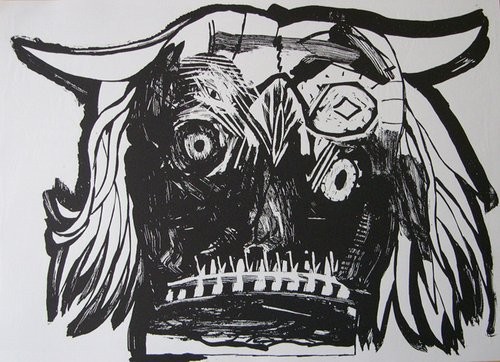 The exhibition "Miroirs noirs" uses as its source materials a portfolio of engravings made by the artists, a selection of their one-off pieces, but also other works by contemporary artists as well as less recent engravings. It intends to approach the issue of images, not from the angle of their reproducibility, but from a hypothesis on their origins and their evolution.
The dark mirror, an optical instrument that makes it possible to draw a reflected image, but whose colors it tones down and whose lines of composition it intensifies, would then account for the way images form.
In this instance, it establishes links between contemporary artistic practices that may seem poles apart: monochromes (and with them a type of abstraction neither geometric nor gestural) and figuration (the effects of a line - mainly with drawing, but with painting and engraving to some degree as well). Works then become as many dark mirrors, multiplying effects of reflection and counter-reflection with one another.
www.fondation-entreprise-ricard.com