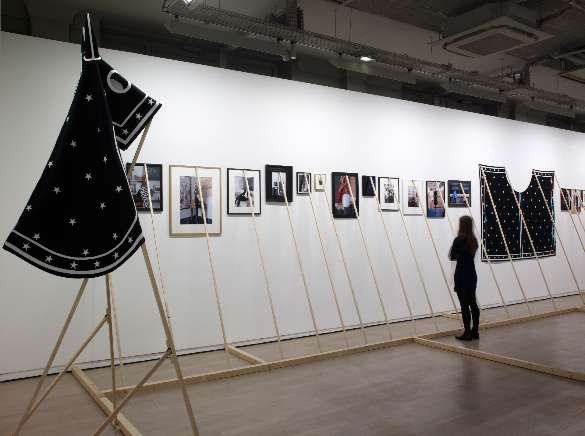 This winter, the Fondation d’entreprise Ricard is presenting Renaud Auguste-Dormeuil’s first personal exhibition in a Parisian institution. On this occasion, the artist is to show brand new pieces. The event coincides with another exhibition of Auguste-Dormeuil’s work at the Mac-Val (Musée d’art contemporain du Val-de-Marne)*.

To Renaud Auguste-Dormeuil, the real is but a thin film veiling an infinitely richer world than the one we look at every day. To mention just one example, visiting a museum in his company is quite an experience. With Auguste-Dormeuil, the elements given to see—the works—grow richer when the structures protecting them are considered. Our field of vision still encompasses the works being presented, but it is expanded by other elements: the attendants, whose rounds draw precise choreographies; the surveillance cameras, which scan exhibition spaces; the motion detection systems, which slow down the visitors’ progress.

By revealing what lies behind the scenes in any museum, Renaud Auguste-Dormeuil claims the mantle of a worthy heir to the pioneers of Minimal Art who, exhibiting an insignificant object (a mere black cube for instance), gave the visitor the chance to actually look at things. And this look could only drift behind the scenes: from the object to the floor, from the floor to the wall, the ceiling and the lighting system, to the security system and other visitors present in the space. While the insignificant object definitively marked the end of a window-like vision (and the associated possibility of concentrating one’s look on an object, ignoring what lay around it), Renaud Auguste-Dormeuil has amplified the experience of what surrounds the works, applying it to the very way an exhibition may be approached and designed. Such experience thus becomes possible not only through what is exhibited, but also by the institution as a whole, with its security-related aspects, the mediations it offers, the form it takes, etc.

This emphasis on what is usually not shown or given a thought sheds light on Renaud Auguste-Dormeuil’s artistic practice. We all know what happened on September 11, 2001, but do we remember the day before, this last day of innocence when we could look at the sky and contemplate a peaceful future? In a sense, September 10, 2001 was an insignificant, peripheral day until the artist widened our field of vision and dilated our notion of time to include the day before 9/11 in our interpretative system.

With his exhibition “It’s time,” Renaud Auguste-Dormeuil further emphasizes this notion. The first room features magazines published in Italy in the 1970s, like Storia, a history periodical, and Il Borghese, an extreme-right monthly whose cover regularly showed pinups next to enticing titles such as “Maids and Ministers.” The artist browsed through these magazines, looking for reproductions of interest to him. He “reveals” these to some degree by cutting them out in the thickness of pages preceding them. The reproductions thus enter in a dialogue with the main character appearing on the cover. Though chained to the anonymous depths of other pages, downgraded in some way to a status “off the frame” or “off the cover,” they claim some of the spotlight, proudly asserting their status as images.

An adaptation of Hitchcock’s famous film Vertigo is projected in the second room, but the artist has taken all dialogued scenes out of it. The storyline becomes impossible to follow; characters no longer communicate with one another, as if overcome by their own shadow. The peculiar narrative arc so strongly associated with the master of suspense dissolves in what now looks like an endless landscape, eluding any attempt at narration.

A portrait gallery concludes the visit of the exhibition. The artist printed the portrait of forty collectors or so, leaving it to them to choose the format, printing technique and framing. Some are almost as large as movie posters, others the size of a postcard, yet all have undergone the same treatment by the artist: each portrait features a face split into two parts. Just as the identity of actors in the cinema is partly grounded in their voice, the portrait finds its relevance in the details of the face, its expression, its eyes, its presence. Let actors lose their voice, or the face its singularity, and our own way of approaching an image becomes hesitant, our familiar markers disappear. Then, after gradually vanishing from our interpretive system, the image reappears, rife with new clues and ready to reveal new territories until then left aside.