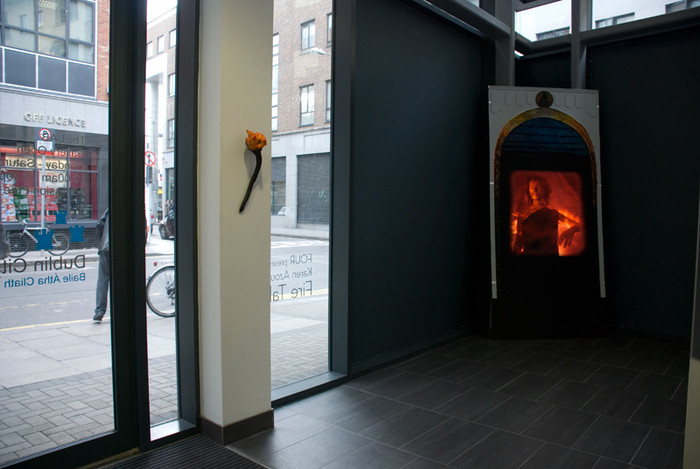 The history of women and fire is a fraught one. From hearth to witch
burning, the relationship between female and flame has intertwined,
often deleteriously, since time immemorial. Fire Tale, Karen
Azoulay's latest consideration of the enduring power of symbol and
archetype, reanimates several mythic collisions of the feminine and
the incendiary with photographs, sculptural props, and a video
installation.
Azoulay's images recall figures such as the legendary phoenix,
Cinderella, Prometheus, and the Statue of Liberty, yet Liberty's torch
is papier-mâché, its fire a crown of broken orange glass; the ominous
waters of New York Harbour are merely swathes of shimmering blue
fabric pieced together around the whitewashed live model. Flames in
other works comprise small pennants of fabric blown by a fan, their
minatory quality the result of lighting and a suspension of disbelief.
Azoulay creates her images from the most prosaic of materials and the
most transparent of effects. Their homey charm and plainspoken
theatricality seem not so unlike that of a school pageant; the video,
Phoenix Rising, in fact, plays within a proscenium constructed from
foam board and house paint. But Azoulay's craft (and the word is used
advisedly) does nothing to diminish either the resonance or the
potency of her work. It succeeds because of, rather than in spite of,
the coexistence of its gravely learned ends and its unpretentiously
ingenuous means.
Karen Azoulay was born in Toronto, Ontario, in 1977, and received her
BFA from York University in 2000. Solo exhibitions of her work include
Wading Under a Crackling Sky, curated by Glenn Ligon at CUE Art
Foundation in New York (2007), and The Evening Canopy and the Sunset
Hour at Mercer Union in Toronto (2006). Her installations and
performances have been seen at The Art Gallery of Ontario and The
Power Plant in Toronto; White Columns in New York; the Islip Art
Museum in East Islip, New York; Hanna Gallery in Tokyo; Art & Idea in
Mexico City; and Galerie Kunstbuero in Vienna. She lives and works in
New York City.
The exhibition Fire Tale is curated by Joseph R. Wolin.
This exhibition is hosted in Dublin City Council
@ The LAB, Foley Street, Dublin 1
www.fourdublin.com