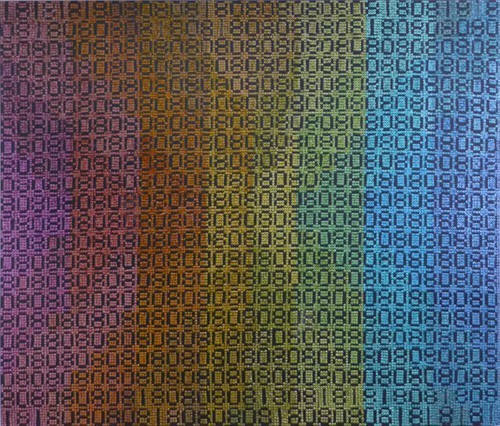 Foxy Production presents ABSTRACT ABSTRACT, an exhibition of paintings and prints that interpret and deploy abstraction in surprising and provocative ways. The artists – Michael Bell-Smith, Heather Cook, Hilary Harnischfeger, Gabriel Hartley, Xylor Jane, Ilia Ovechkin, and Max Pitegoff and Travess Smalley - reset the art-historical boundaries of abstraction, infusing it with unexpected elements and influences. Avoiding a sense of purity, they play abstraction off against representation. They use a range technologies – from the old to the very new - to push its possibilities to the limits, or to reconstitute subtly its different styles into new amalgams.

MICHAEL BELL-SMITH’s digital prints are Pop-infused, conceptual takes on contemporary culture. For Abstract Abstract he directly appropriates a series of composition notebook covers, with their traditional marbled design and black sewn binding. The books’ patterning is associated with order, restraint and propriety; yet, its swirling forms also present a vision of the infinite, as if inner or outer space could be found within.

HEATHER COOK paints with bleach, oil or acrylic upon cut or sewn printed fabrics. Folds are key to her works; appearing as marks or creases, they provide them with a textured quality and a dramatic, scultpural bearing. With their combination of flatness and depth, they appear to be in the throes of material transformation, flowing out into the space.

HILARY HARNISCHFEGER’s paintings combine paper, plaster, ink, glass, and quartz and other minerals in intricate and expressive abstractions. Appearing at once historical and contemporary, they charter a potently visceral course in their reworkings of Modernist strategies. Their paradoxically bold yet subtle treatments of material, line, depth and space crystallize within corporeal fields of color.

GABRIEL HARTLEY’s oil paintings, sculptures, and over-painted postcards transition the techniques of historical abstraction into an expressionistic system of appropriation and reference. His work sustains a sense of action, emotion, and rawness, where his subjects seem caught dynamically in the process of unravelling.

XYLOR JANE’s paintings are complex, inter-relational tableaux of colors, numbers, grids and histories. Their intense patterns invite engagement as they point to narratives that are, at first, only partially revealed; on contemplation, their poetry, physicality and emotions become palpable.

Layering images one on top of the other, ILIA OVECHKIN uses digital technology to examine the relationship between digital representations and traditional painting. He uses commercial large-format inkjet printing to produce uncanny combinations of techniques, patterns, and shapes.

MAX PITEGOFF and TRAVESS SMALLEY’s prints go against the grain of conventional digital image-making, contradicting its Realist values of transparency, depth of field, and perspective. Their works are simultaneously flat and multi-dimensional fields of colors, abstract forms and representational images. With their broad mix of inputs and approaches, they inventively play with the structure of online design, and the way it circulates.