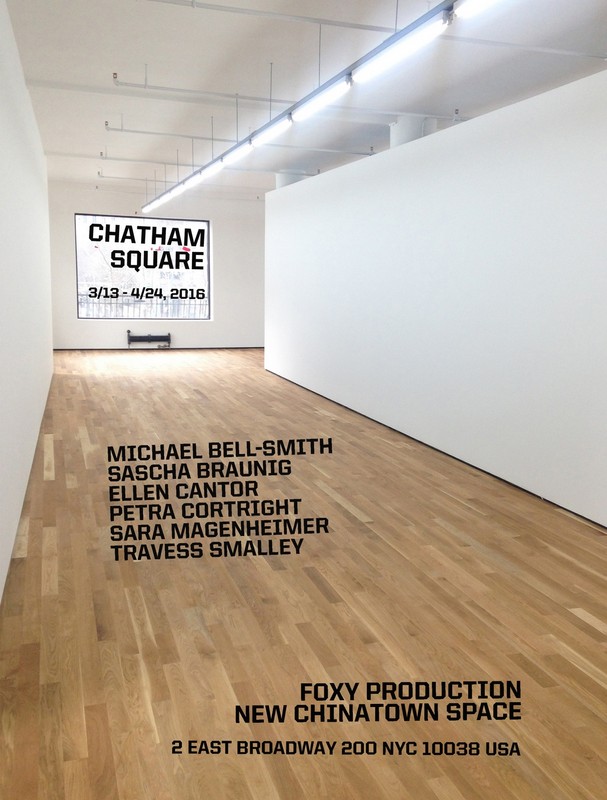 Chatham Square is the historic intersection the gallery looks onto. The confluence of eight streets, the square was also once the junction of two elevated railways. Chatham Square, the exhibition, reflects this history of synthesis, of traffic flows, and of local connections. It includes painting, video, drawing, sculpture, and collage by Michael Bell-Smith, Sascha Braunig, Ellen Cantor, Petra Cortright, Sara Magenheimer, and Travess Smalley.

Sascha Braunig presents portraits in oil that appear to both avow and disavow the figure. Foreground, middle-ground, and background shift into and out of her subject’s armature-like bodies in paintings that are at once vivid, playful, and anxiety-inducing.

Ellen Cantor’s works on paper integrate childhood characters, such as Barbie, with graphic lines and dots. These abstract elements fuse onto and around her iconic figures, giving each work a sense of disengagement, where the familiar and reassuring become odd and unnerving.

Petra Cortright’s semi-abstract digital painting on linen is an intense, riotous field of colors and forms. Its flowers, horizontal plane, and landscape orientation combined with its painterly gestures and geometric shapes give it the sense of a hallucinatory Disney woodland scene.

Travess Smalley presents a new series of compact digital paintings on aluminum that feature duplicated abstract sections. Recalling Warhol’s screen-prints’ plays with repetition, Smalley’s works use the process of printing as both their subject and form.

Michael Bell-Smith (East Corinth, ME, 1978) takes familiar visual elements from games, advertising, interiors, and corporate design, among other places, and positions them within unexpected conceptual frameworks. His digital animations and appropriations wryly reflect upon our cultural moment: as he tracks the circulation and proliferation of images and sounds, he charts a rapidly changing history of viral content. He mixes flatness with deep perspectives and motion with stillness in dynamic meditations on the image’s hold on truth.

Bell-Smith lives and works in Brooklyn, NY. He holds a BA in Semiotics from Brown University, Providence, RI; and an MFA from Bard College, Annandale-on-Hudson, NY.

Sascha Braunig (Qualicum Beach, BC, Canada, 1983) makes paintings and drawings that combine vibrant color and an hypnotic style. Her works reflect upon illusion and the surface of the represented subject. In dream-like scenes, where repetition and patterning are foregrounded, Braunig’s figures emit an extrasensory glow; flaring with reflected color, they are iridescent beings whose very skin seems to be a source of psychic power.

Braunig currently lives and works in Portland, ME. She holds a BFA from The Cooper Union, New York, and an MFA in painting from Yale University.

Ellen Cantor (Detroit, MI, 1961 – New York, NY, 2013) made drawing, painting, collage, and video that combine autobiography, Disney characters, and horror films, among other elements. She created disturbing mythical narratives that, like modern adult fairytales, juxtapose innocence, violence, and sexuality. Unsparingly fusing the comedic and the tragic, her disarming scenarios cross back and forth between fantasy and realism.

Petra Cortright (Santa Barbara, CA, 1986) has developed a practice centered on the creation and distribution of digital files, whether they be videos, GIFs, or jpegs. Her self-portrait videos are made using her computer’s webcam and their default effects tools, which she then uploads to YouTube. Cortright’s paintings on aluminum or linen are created in Photoshop using painting software and appropriated images, icons, and marks.

Cortright lives and works in Los Angeles, CA. She has studied fine art at Parsons The School of Design, New York, NY (2008), and the California College of the Arts, San Francisco, CA (2004).

Magenheimer lives in Brooklyn, NY. She holds an MFA from Bard College, Annandale-on-Hudson, NY (2014), and a BFA from The School of the Museum of Fine Arts, Boston, MA (2004).

Travess Smalley (Huntington, WV, 1986) makes works that are hybrids of analog and digital practices. Combining painting, drawing, Photoshop, Xeroxing, scanning, or stenciling, he renders images that confound the viewer’s perceptions. Content and form never seem to stabilize; his images are dynamic fusions of the past, present, and future: of art historical methods, of the state of the art object today, and of art generated by code.

Smalley lives and works in New York City. He holds a BFA from The Cooper Union, New York, and studied at Virginia Commonwealth University, Richmond, VA.

MATHESON WHITELEY is an architectural studio established by Donald Matheson and Jason Whiteley in 2012. From its London base, the practice has undertaken projects in UK, Europe, and North America. Both directors founded the practice following a number of years in senior positions with leading architects Herzog & de Meuron (Switzerland) and Tony Fretton Architects (UK) delivering complex cultural and residential projects throughout the world, including the Fuglsang Kunstmuseum in Denmark and The Tate Modern Project, the £215M expansion of the contemporary art museum in Southwark.
www.foxyproduction.com