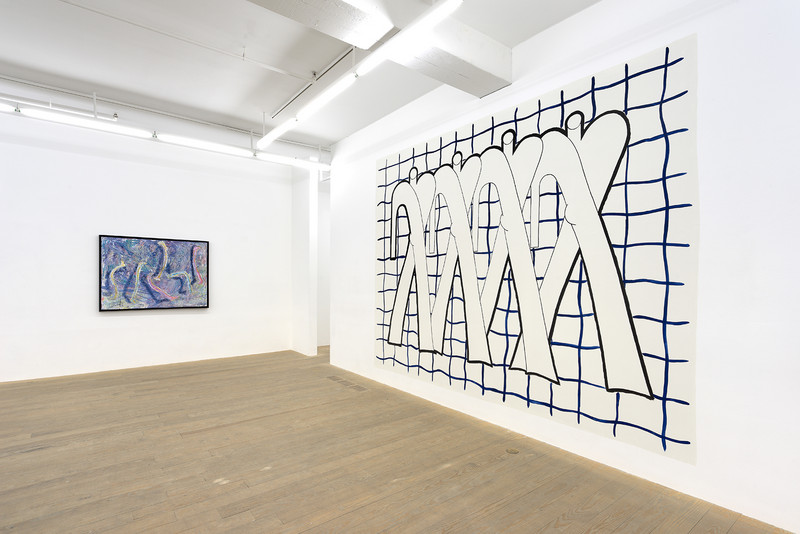 Foxy Production is pleased to present a two-person exhibition, comprising new works by Gabriel Hartley and Denise Kupferschmidt. It includes a series of oil and spray paintings by Hartley and drawings, wall paintings, and sculpture by Kupferschmidt. Both artists use dynamic lines to produce an intermediate visual space that lies somewhere between pattern and figure, and between flatness and depth. They employ different strategies to achieve this: while Hartley builds his forms through texturing his surfaces and repeating his patterns and marks, Kupferschmidt stylizes the human body and the settings
it inhabits.

Hartley’s paintings channel early abstraction’s experimentations with new visual languages into the digital era. Their striated surfaces reveal a frosted substrate that illuminates their patterned gradations of pigment. None of the works are figurative, yet their cross-hatched lines and sections of color allude to formal systems, to maps, languages, or architecture. Some have characters with a shadowing effect that appear, graffiti-like, to be sub-cultural symbols or words in the process of formation.

Inspired by the fashion shots of photographers such as Richard Avedon and the motion captured by proto-cinema pioneers such as Étienne-Jules Marey and Eadweard Muybridge, Kupferschmidt places line figures within gridded frames. She draws directly onto the pages of old books and then uses her drawings as plans for her other works. Appearing like Modernist vases, her sculptures have humanoid shapes and a two-dimensionality that ties them to the drawings they are based on. Her large wall paintings have schematic human figures in front of patterned backgrounds. Like fashion models, her characters are depersonalized; yet, unlike them, they are not idealized: they are imperfect copies of
one another.