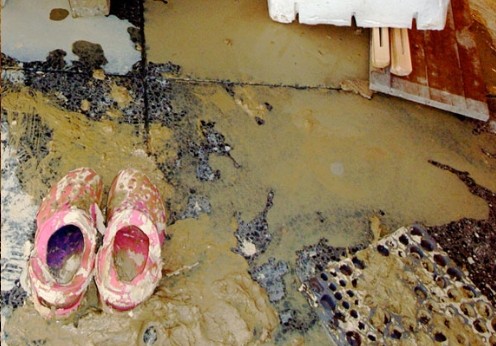 Foxy Production presents Year of The Pig Sty, Hany Armanious’ inaugural New York exhibition. In Armanious’ provocative work, perverse actions take place upon unexpected materials, resulting in enigmatic objects, scenes and associations. Like a pranksterish alchemist, he transforms the process of casting into a witty and symbolic practice. His detours and digressions through the fictional systems he constructs, paradoxically foster both confusion and engagement.

Year of The Pig Sty is an installation with an internal logic that seems more elusive the longer the work is contemplated. The viewer is greeted with a shocking vista of filth and disarray: on closer inspection, the work resembles a wayward workshop, where strange organic objects are crafted from mud. A desperate struggle seems to have taken place to keep an outmoded artisanal practice going.

The installation is a site where intense and delirious actions have taken place, where motives remain mysterious, and odd linguistic connections are forged. Recalling Beuys’ interplays between textures and history, Year of The Pig Sty inventively interweaves materials and allegory; but unlike Beuys’ work, the associations here are inconclusive, provisional, and likely to be misleading.

How various parts of the installation relate to one another can be alternately elementary or elusive. Crocs, the lightweight therapeutic footwear made through injection casting, figure centrally in the work: in one area, a chaotic collection of Crocs, shoe molds, molded bacon, shoeboxes, socks, among other elements, poetically and humorously conflates therapy, consumerism, and failure. An oversized Styrofoam box, hand-carved and containing mud and oversized truffles made from soil and resin, is surrounded by muddy Croc footprints. A trough constructed from form-ply is filled with mud, as if waiting for pigs to return. Resembling an alien pod, a white Styrofoam box is fused with the sole of a Birkenstock and cast in resin. A doormat with hollows is used to mold circular bricks through the action of the muddy Crocs being wiped on it. The bricks are dried under a snooker table light with hydroponic grow lamps that resembles a descending spacecraft. The same bricks are braced together to form pottery pool cues; apparently the end-product of this wayward production line.

The installation represents perhaps an artist’s studio in throes of fervid activity. Messy, unformed, embryonic objects are in the process of objecthood, as if we are witnesses to the primal scene of creativity. Or has the habitat of the artist been terminally disturbed, the scene contaminated, the project abandoned?
www.foxyproduction.com